Smith smacked four boundaries and one big six in his fifty.

Steven Smith reached his half-century for Australia in the ODI match played against Pakistan at Sharjah. It was Smith’s first half-century in his ODI career. He had been drafted in to bat at No. 3 position and he played responsibily.

Smith came on to bat when Australia lost their first wicket on the first ball of the match. Smith partnered with David Warner and took the Australian team to safety. Warner got out to Shahid Afridi when he was batting at 43 but the pair had already pushed out the danger that was hanging on the heads. The team reached 100 in the 22nd over.

Smith smacked four boundaries and one big six in his fifty. 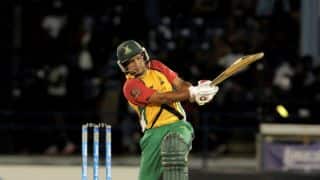