Ian Chappell feels that Steven Smith should continue as captain even if Michael Clarke returns.

Former Australia captain Ian Chappell has said that stand-in-skipper Steven Smith should continue to lead the national side even if the injured Michael Clarke returns to the field. Hailed as a natural leader by many experts, Smith was the unanimous choice of the selectors after Clarke pulled out with his hamstring trouble, leaving Brad Haddin to continue as vice-captain. Chappell also believes that Smith knows his job well.

“Michael Clarke is probably going to struggle to make the Caribbean. He [Smith] could be captain for quite a while now,” Said, Chappell.
“And if he does a decent job I don’t think Michael Clarke should be given the job back. I think he should keep it,” he added.

The 33-year-old Clarke, who underwent a successful surgery to repair his hamstring tendon, could be out for a while and Smith, who was handed the captaincy on Sunday ahead of the second Test against India here, is expected to continue for a while. Smith, 25, is the third youngest player to lead Australia at Test level and the youngest since Kim Hughes took over from Graham Yallop against Pakistan in 1979.

“I always thought about 27 was right because you’re then more mature as a person,” Chappell said. “You’ve generally, in an Australian side, played a lot of cricket so you’ve had experience in a variety of conditions and you’ve established yourself as a player and won the respect of your teammates as a player. Twenty-five is a little younger than that but he’s done all those things.”

If Clarke was to come back, Chappell said, he should return as a player, which is what Ricky Ponting did after he relinquished captaincy following the 2011 World Cup. “I don’t think you can be chopping and changing captains.

And then you’ve got the other problem if Michael Clarke does come back, his injury history now is so bad, as a selector you’d be very worried that he’s there for one and gone for a couple,” Chappell said.

“I don’t think you need to be chopping and changing. If Smith is doing a good job you just say ‘right, we’ll stick with him and have Michael Clarke as a player’.” 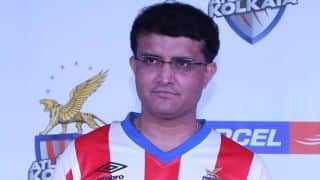