Australian cricket underwent massive shake-ups in the past few weeks.

Australian cricket underwent massive shake-ups in the past few weeks. First, the ball-tampering saga and it ended Channel Nine’s 40-year involvement with the sport. Fox Sports and the Seven Network took control for Australian summer and domestic cricket after securing the A$ 1.3 billion to broadcast cricket for next 6 years. Banned former skipper Steven Smith is reportedly being considered for commentary role during his 1-year suspension for ball-tampering.

Smith is currently in New York, escaping the media and public heat back home. Sunday Telegraph reported that he is a possible recruit for Foxtel’s new cricket channel. Despite several sponsors abandoning ties with Smith, Fox Sports are willing to stand by the disgraced skipper.

Patrick Delany, Foxtel’s CEO, did not comment on the commentary panel but did not rule out Smith joining the team.

When it happened we all got together and said we ve known Steve for a long time. He s been on our books for many years and we should stand by him, Delany was quoted as saying in a report from news.com.au.

The traditional Channel Nine line up included Ian Chappell, Bill Lawry, Mark Taylor, Shane Warne and others. This is set to change. However, Fox Sports are not ruling out a role for the legendary Lawry.

All I know is our team will look young and inclusive. But there s nothing wrong with a bit of grey hair in that. Never underestimate the power of wisdom. We re not ruling out anyone,” said Delany.

Adam Gilchrist, Ricky Ponting and Warne are being mentioned as possible recruits for Channel 7.

Smith is ranked No.1 in Tests rankings. His role in the ball-tampering sage in Cape Town last month earned him and David Warner a yearlong ban and two-year ban from leading Australia. 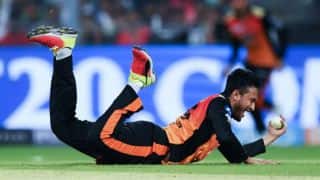