Smith, who becomes the third youngest man to lead his country, smashed 162 not out in 1st Test.

Twenty-five year-old Steven Smith takes over as captain of Australia against India at the Gabba on Wednesday with a promise to pursue an aggressive style of cricket. Smith vowed to lead Australia by setting strong examples.

“As a captain first and foremost I’ll try to lead from the front with my performance on the field. We’ve been playing some very good cricket and we’re going to continue playing that aggressive, positive brand of cricket,” Smith, who has played 23 Tests, told reporters.

Regular skipper Michael Clarke is expected to miss the rest of the four-match Test series due to injury and Cricket Australia (CA) on Monday handed the job to Smith following Australia’s first Test victory in Adelaide at the weekend.

Smith, who becomes the third youngest man to lead his country, smashed 162 not out in the first innings and was 52 not out in the second in Adelaide. He vowed Australia’s in-your-face attitude will not change. “When we cross the line there are no friends. We’re not friends with the opposition,” Smith said.

CA looked to the long term and first officially appointed Smith as vice-captain to Clarke on Monday before confirming he would therefore lead the Test side in Clarke’s absence. Veteran wicketkeeper Brad Haddin, who captained Australia on the final day in Adelaide, will serve as deputy in Brisbane.

Sachin Tendulkar: Dedicate one hour per year to clean India 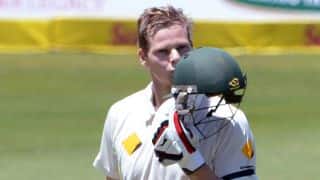