Australia's Test great Alan Border feels that introduction of young players like Steven Smith in the team will energise the Michael Clarke-led side against a confident India. 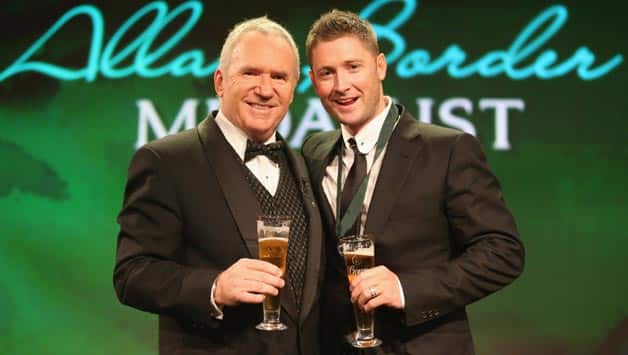 Allan Border (left) said he had a good chat with Michael Clarke, who seems to be in a good space © Getty Images

Australia’s Test great Allan Border feels that introduction of young players like Steven Smith in the team will energise the Michael Clarke-led side against a confident India.

Border, who is here as a TV commentator for the Border-Gavaskar Trophy, said he had a good chat with Clarke Thursday afternoon on the state of affairs in the Australian cricket. Australia are trailing 0-2 in the four-Test series after suffering heavy loses in Chennai and Hyderabad.

“I had a good chat to him (Australian captain Michael Clarke)… about where Australian cricket’s at and what he can do to improve things,” Border commented. “It was a good general chat. He’s in a good space.”

Australia had to make four changes in the side after vice-captain Shane Watson, Usman Khwaja, James Pattinson and Mitchell Johnson were sidelined for selection for the third Test over the ‘homework affair’.

Brad Haddin and Steven Smith will be playing their first Test in the series while Nathan Lyon and Mitchell Starc come back to the side after missing the second Test in Hyderabad.

“The team will be galvanised by recent events as well. They have made quite a few changes and sometimes new players bring a lot of energy to a team, especially if you have been struggling,” said Border.

The legendary Australian captain felt great to see Smith back in the side after a gap of two years.

“It’s good to (see) Steven Smith getting a chance. Brad Haddin is back into the frame and he will add some seniority and knows the conditions well here in India. Mitchell Starc comes back into the side and Nathan Lyon … there is a good balance about the Australian side,” he said.