The 25-year-old Smith became the youngest winner since a 23-year-old Clarke in 2005.

Sydney: Australia’s star batsman Steven Smith has capped off an incredible 2014 by winning his first Allan Border Medal, becoming the youngest winner since Michael Clarke to do so.

The 25-year-old Smith became the youngest winner since a 23-year-old Clarke in 2005, in a year where he scored seven tons and a total of 1,756 runs across all three formats, excluding last week’s unbeaten knock of 102 in Hobart. Smith scored a clean sweep of the top awards, taking out both the Test and One Day Player of the Year awards, news.com.au reported.

Already, after just 26 Tests and 49 ODI games, Smith has 11 tons to his name, with the majority coming in a stellar 12-month period. He started his rise quietly during the back-to-back Ashes series, before exploding against India in the recent Test series with four tons in as many Tests. Smith is also the first man in history to ever score a century on both his Test and ODI debuts as captain. 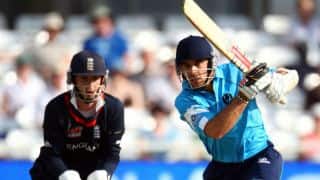