England captain Andrew Strauss was optimistic Chris Tremlett would be fit to face India in the second Test at Trent Bridge despite the fast bowler's "tight" hamstring. 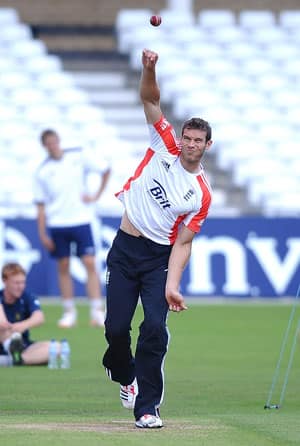 England captain Andrew Strauss was optimistic Chris Tremlett would be fit to face India in the second Test at Trent Bridge despite the fast bowler’s “tight” hamstring.

The giant Surrey quick, who suffered the injury during England’s 196-run first Test win at Lord’s concluded Monday, trained briefly at Trent Bridge on Thursday — the day before the second of this four-match series starts.

He also received massage treatment on the outfield.

With England set to field just a four-man attack, they won’t want to gamble on the fitness of one of their bowlers, especially as Lord’s showed what can happen when a member of a bowling quartet breaks, with India’s Zaheer Khan spending most of the match off the field because of a hamstring problem.

Strauss, however, said of Tremlett: “I think he’s fine, obviously he’s had a bit of a niggle with his hamstring. He’s just getting a massage and will be coming out for a bit of a bowl later.

“At the moment we expect him to be fit for tomorrow (Friday) but obviously like all these things we’ll see in the morning.

“We’re confident he should be okay.

“You’ve always got to weigh these things in, it’s a short turn-around between Test matches but we’re not going to pick someone in the side unless we’re sure he is 100 percent fit and able to get through the full five days.”

And he said there would be no issues over Tremlett being so keen to keep his place in the side that he would go into the game not fully fit.

“Everyone understands they have a responsibility to be honest,” he said.

Strauss added: “Tim Bresnan has not let anyone down. He was outstanding in Australia and is getting better and better.”

England will replace India at the top of the ICC’s Test Championship table if they win this series by 2-0 or better, but Strauss said: “We’re not worrying about that, just winning the next match and the series.”

And he warned India would be stung by the manner of their defeat at Lord’s.

“When you lose a Test, you want to prove you are better than you showed and I’m sure India will want to do that.”

Strauss added England would not be getting carried away on the back of their first Test win, saying: “If you’re too self-satisfied, you get caught out the next time you are on the field.”