England captain Andrew Strauss is to play for Somerset against India next month in a bid to warm-up for the Test series with MS Dhoni's ICC table-toppers. 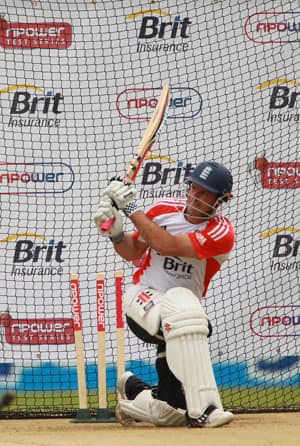 England captain Andrew Strauss is to play for Somerset against India next month in a bid to warm-up for the Test series with MS Dhoni’s ICC table-toppers.

Strauss, who led England to a 1-0 Test series win against Sri Lanka after the third and final Test was drawn at the Rose Bowl here on Monday, has retired from limited overs internationals, so he will miss the upcoming one-day series with the Sri Lankans.

Instead he plans to return to Middlesex, the county he has represented throughout his entire professional career.

But Middlesex have just one four-day County Championship match, against Gloucestershire at Uxbridge in the next three weeks.

That could leave him short of time in the middle before the start of a four-Test series with India.

He also three times fell cheaply to left-arm seamer Chanaka Welegedara, sparking concerns about a possible weakness given India’s attack will be led by Zaheer Khan.

The Somerset match takes place from July 15-17 and is India’s only warm-up fixture before the first Test at Lord’s, Strauss’s Middlesex home ground, gets underway on July 21.

“It’s a good indication of how the counties can work together,” England coach Andy Flower told Sky Sports of the decision to let Strauss play for south-west side Somerset.

“We knew it was a challenge about how much cricket he will get before the Test series. We were looking for opportunities for him to play. We approached Somerset and they’ve been wholly positive.”

Strauss, in a statement released later by the England and Wales Cricket Board (ECB), added: “Andy Flower and I looked at the schedule in the three weeks leading up to the first Test against India and looked at what opportunities there might be for me to play cricket.

“We saw that Somerset had a tour match against India and we decided to approach them and see if they would be willing for me to play.

“We were very sensitive to Somerset’s feelings on this and if at any stage we felt they weren’t comfortable with the idea then it would have been a non-starter.

“But they were very keen on the idea and we’re very grateful for them to give me the opportunity to play some cricket before the first npowerTest match and hopefully I can spend a bit of time with their young cricketers at the same time,” the 34-year-old left-hander added.

“Any time I get the opportunity to play against the touring side prior to the series starting I take because it gives me an opportunity to see their bowlers and more than anything it’s about getting some cricket.”