Test cricket's under-achievers New Zealand and Bangladesh will strive to resurrect their fortunes after a dismal run when they open a two-match series in Chittagong on Wednesday. 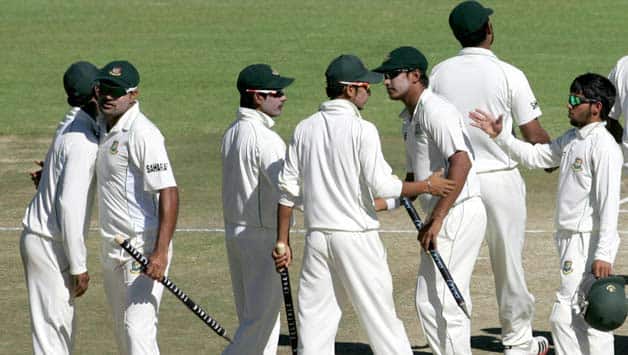 Bangladesh have lost eight of their last 11 Test matches, with only only win in the last three years © AFP

Test cricket’s under-achievers New Zealand and Bangladesh will strive to resurrect their fortunes after a dismal run when they open a two-match series in Chittagong on Wednesday.

Bangladesh are tottering at the bottom of the Test table, lower than fellow wooden-spooners Zimbabwe, after losing eight of their last 11 matches and with just one win in the last three years.

New Zealand are ranked just above Zimbabwe and Bangladesh in eighth place, having suffered 10 defeats in their last 16 Tests. Their lone win in this period came against Sri Lanka in Colombo in November 2012.

Skipper Brendon McCullum and coach Mike Hesson will hope to build on New Zealand’s overwhelming unbeaten record against Bangladesh, having won eight of nine Tests so far and drawn one.

This will be New Zealand’s first Test series in Bangladesh since 2008, when they won 1-0 following a hard-fought three-wicket victory in Chittagong after being set a fourth-innings target of 317.

Inspirational all-rounder Daniel Vettori, who scored a match-winning 76 in that game, is absent this time after undergoing surgery on a troublesome Achilles tendon.

The Black Caps, who will also be without batsman Martin Guptill and seamer Tim Southee, have called up uncapped leg-spinner Ish Sodhi and all-rounder Corey Anderson for the series.

The tourists’ preparations for the first Test have been hampered by bad weather, which forced their lone three-day practice match in Chittagong to be abandoned without a ball being bowled.

Rain has been forecast for the entire week, leaving the ground staff at the Zahur Ahmed Chowdhury stadium worried as they prepare for the first competitive game on the newly-laid surface since the pitch was dug up in 2011.

“Even though the wickets here are low and slow, history suggests that the quick bowlers have done well against Bangladesh,” said Bond. “It’s going to be hard work and it’s going to be hot and humid, but our bowlers are willing to bend their backs.”

The hosts have recalled left-arm spinner Abdur Razzak after a two-year absence at Test level, and also brought back batsman Anamul Haque, 20, who missed the previous series in Zimbabwe due to college exams.