Stuart Binny added that RR need to work on their bowling, especially in the death overs.

After winning five consecutive matches in Indian Premier League (IPL) 2015, Rajasthan Royals (RR) registered to back-to-back defeats. They first lost against Kings XI Punjab (KXIP) by a Super-Over and then on Friday lost to Royal Challengers Bangalore (RCB) after posting a low score.

Royals’ all-rounder Stuart Binny expressed his disappointment on the consecutive defeats and hope to improve his own performance too.

“We have to take today as something that we didn’t go out and do well. We didn’t execute with the bat and we saw that RCB had an easy chase. So we have go back, sit down and ponder what we can do differently to score more runs. The wicket didn’t suit our batting today which didn’t help also. But we are in a decent position (in the points table); we just have to go out and keep playing positive cricket so that we can keep winning matches,” Binny was quoted as saying by the official website of IPL. Indian Premier League (IPL) 2015: Complete coverage

Speaking on the middle-order collapse, Binny said, “I don’t think we read the wicket too well. It was a wicket where you needed to take your ten balls to score runs. We played a couple of bad shots also. It’s credit to them that they bowled well. They varied their pace a lot on this wicket. As we saw, we found it hard to strike boundaries; but we still tried to get the boundaries which didn’t help us and we lost wickets. Like I said, they bowled well and if we come across a wicket like this then we need to see how we can express ourselves better, bat well and get more runs.”

Binny felt that the wicket at Ahmedabad was slow and RCB bowlers’ bowled cutters, which made it difficult for batsmen to play.

“It was really slow. It didn’t have much pace in it so you couldn’t really hit down the ground. And they bowled a lot of cutters into the wicket which made it difficult to get over mid-wicket as well. This is the slowest of the wickets that we have played on so far. We go to Mumbai (to the Brabourne Stadium) now to play the remaining home games; so hope it gets good there.”

“We need to bat well. We have the firepower. We have the guys who can take the score to 200 in the back end of the game. The starts have been excellent so far; we messed up only one start so far. We need to give ourselves little bit of time and go hard again.”

“Bowling is something that we can definitely work on, especially in the death overs. We have practiced hard; it is about coming out and executing it. We are going to take a break and come out fresh.”

When asked about what was the strategy when he came into bat with five wickets down and the score was 89, Binny said, “My partner [Steve Smith] said it was hard to hit the cricket ball from ball one. So I tried to rotate the strike a bit. The plan was for me to bat till the 18th over (and) then go hard (at the bowling), but I got out in the 17th which is pretty disappointing because at the time I could have held one end. We could have taken five runs of the over at that time because we were struggling with wickets. I have to learn from that situation and play the ball accordingly.” 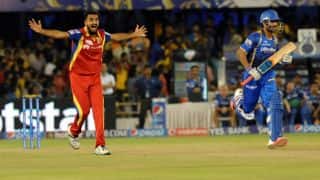