Stuart Binny not replacing anyone, will be the 16th member of the squad: BCCI

Stuart Binny not replacing anyone, will be the 16th member of the squad: BCCI

After making his debut in England last year, Binny has played three Tests so far in his career.

The Indian team management has called up all-rounder Stuart Binny in Sri Lanka as the 16th member of the current squad. The Media Manager of Indian team confirmed to CricketCountry that Binny is not going to replace anyone from the current team, he is just an ‘addition’. Binny will be leaving for Sri Lanka soon and will be available for selection for the second Test, which is starting from August 20 at P Sara Oval. India are currently 0-1 down in the series following their humiliating loss at Galle. So it will be interesting to see what value the addition of a medium pace all-rounder will add for the Virat Kohli-led struggling Indian team. READ: Stuart Binny to join Indian squad in Sri Lanka ahead of 2nd Test

After making his debut in England last year, Binny has played three Tests so far in his career. His last Test assignment was England at the Oval in his debut series. This all-rounder from Karnataka is yet take his first Test wicket but with bat he played couple of handy knocks. His addition will give the team management an extra all-round option. Binny can bat in the top six and provide a fifth bowling option for Kohli.

As of now, it looks like that out of form Harbhajan Singh might just have to make way for Binny in the playing eleven. However, it has also been learnt that Murali Vijay’s hamstring injury is being monitored by Team physio Patrick Farhart and a final call on his inclusion in will be taken a day before the second Test. 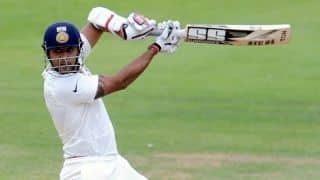