Stuart Binny‘s fifty on Test debut has bailed India out of troubled and helped save the first Test against England at Trent Bridge. India are on 347 for eight with a lead of 308 runs at tea on the fifth day and have put the Test well on course for a draw. Binny’s innings of 78 proved to be the turning point of the last day.

While the highlight of first session was the dodged resistance of Binny and Ravindra Jadeja, the second session put the result of the match beyond doubt with a eighth wicket stand of 91 runs between Binny and Bhuvneshwar Kumar. England came in to the second session with strong hopes of winning this Test but Jadeja and Binny had put on 66 for the sixth wicket. England had to rely on the new ball to get the breakthrough. James Anderson was at it again finding the edge of Jadeja dismissed caught behind for 31.

England sniffed a victory chance everytime they picked a wicket but then ran in to the resistance of the lower order. The weather had cleared up in the second session and the pitch had eased up considerably. The only task was to see out the new ball. Bhuvneshwar looked solid and the crease and Binny continued from where he left off in the first session. There were some nervous moments but the duo hung on. India’s target was to bat for as much time as possible and Binny has helped them achieve it along with scoring runs freely. Cook’s reluctance to deploy thirdman helped Bhuvneshwar pick some easy runs through that side.

As India’s lead swelled beyond England’s reach, Binny was headed towards a fifty on Test debut. He reached the mark comfortably and a few expansive strokes followed which put a debut ton in sight. Binny was finally dismissed by Moeen Ali for 78, with India’s lead past 300. Soon after, Cook used Joe Root from the other end, perhaps to test their spinning skills as the match headed to a draw. There are 31 overs left which will be calculated as 29 taking the innings change in to account.

Going in to the fifth day, England was the only team who had a chance of winning. But India’s lower order once again has bailed them out. If there was any discussions about Ravichandran Ashwin replacing Binny, this innings would put that to rest. On tricky wickets, Binny at No 7 will be the most assuring part of India’s lower order. 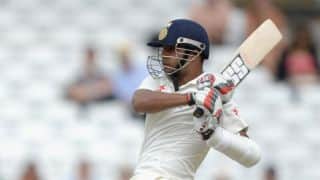