Stuart Broad has got Michael Clarke out for 11 times in Test cricket.

Stuart Broad who has dismissed Australian Test skipper Michael Clarke more than any other bowler—11 times in 21 matches that they have played till date—is determined to make the number 13 in the fifth and final 2015 Ashes Test at Oval, which is also the last game of Clarke’s international career. Broad recently bowled his career’s best spell taking eight wickets in the first innings of the Trent Bridge Test that had shattered the visitors’ side, which eventually got bundled out for a poor 60 in 18.3 overs. READ: Chris Rogers announces international retirement

According to a report from Sydney Morning Herald, when the 29-year-old pacer who has 308 Test wickets to his name was asked about him being always lucky to get Clarke out, he said: “Like, 11 times or something [grinning]. There is time yet to make it 13.” The fourth Ashes Test, that was a second consecutive game in the ongoing series to end inside three days, thereby giving the hosts a superb Ashes victory even before the fifth Test, that is scheduled to commence on August 20.

“Sitting at Trent Bridge on Saturday night, it was very much relief – we’ve won it, what a feeling, soak it in. But Cooky called us all on Tuesday. It was the middle of our week off, but the captain was sat on his farm thinking about it. Australia is a ruthless team when they get on top of you, and we want to have that same tag about us,” Broad added. PHOTO: Michael Clarke, Chris Rogers train together before their last Test 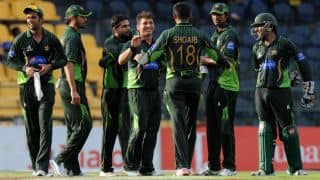 Umar Akmal criticises media for creating controversies against him