Stuart Broad's hat-trick against Sri Lanka had been split across two overs.

Stuart Broad admitted he had no idea he had become the first England bowler to take two Test hat-tricks and just the fourth in all after he struck with three successive balls against Sri Lanka at Headingley on Friday. Braod, who had previously performed the feat against India at Trent Bridge in 2011, struck with the final ball of his 12th over to have Kumar Sangakkara well caught for 79 by Ian Bell in the gully.

The first ball of his next over saw Broad have Dinesh Chadimal caught at first slip by England captain Alastair Cook for 45. Next ball saw Shaminda Eranga caught behind by wicketkeeper Matt Prior. But because the hat-trick had been split across two overs neither Broad nor his England team-mates realised what he had achieved until the public address announcer informed the crowd.

“I had no idea!,” Broad told Sky Sports. “I was listening to the guy that came on the tannoy there and I was thinking ‘why is he mentioning the last ball of the over before?’, and it clicked that that might be a hat-trick.”

Sri Lanka were eventually dismissed for 257 on the first day of the second Test on Friday after losing the toss.

Broad was only the fourth player in Test history to have twice taken a hat-trick after the Australian duo of Hugh Trumble (1901-02 and 1903-04) and Jimmy Matthews, who performed the feat twice in the same match against South Africa in Manchester in 1912, and Pakistan great Wasim Akram, who took hat-tricks in successive Tests against Sri Lanka in 1998-99.

Broad’s latest hat-trick was only the second in all Tests since his last one following Sohag Gazi’s for Bangladesh against New Zealand in 2013-14. And it was also the 13th instance in total of an England bowler taking a Test hat-trick.

Broad’s treble-strike deflected some attention away from Liam Plunkett‘s maiden five-wicket haul, with the fast bowler taking five for 64 on his Headingley home ground after Cook won the toss in initially overcast conditions.

But as the Leeds’ skies brightened up, Sri Lanka checked England’s progress with a sixth-wicket stand of 67 between Sangakkara and Chandimal before Broad removed the former to spark a rapid collapse.

“It was an excellent bowling performance all round, Liam’s got the five wickets and Jimmy [Anderson, two for 49] tied an end up really well.

“There’s always pressure when you win the toss and bowl, you sort of think it should be 200 all out, but we’re pleased with 270 and to get off 15 overs early.

“We had an awkward hour or so there and I think that Sangakkara wicket was the big one,” Broad added. 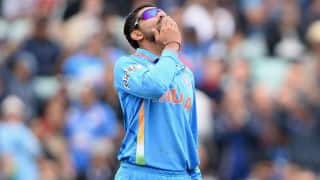 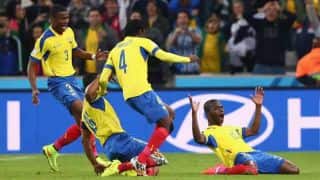