Stuart Broad feels fast bowler Dale Steyn is the bowler of his generation with figures of 406 wickets in 82 Tests at an average of 22.53.

London: Stuart Broad may have risen to number one in the world Test bowler rankings but, as far as the England paceman is concerned, South Africa quick Dale Steyn is the “bowler of our generation”. Broad’s record of 333 wickets in 91 Tests at an average of 28.66 is worthy of considerable respect. But Steyn’s figures of 406 wickets in 82 Tests at 22.53 stands comparison with all-time great fast bowlers such as the West Indies’ Malcolm Marshall, Australia’s Dennis Lillee and England’s Fred Trueman, all of whom had Test bowling averages in the early 20s.

“On the ranking, I’m certainly not going to sit here and say I’m a better bowler than Dale Steyn — I’ve said before he is the bowler of our generation,” explained Broad in London on Thursday at an event staged ahead of next week’s first Test between England and Sri Lanka at Headingley by series sponsors Investec. “It’s very nice to be at the top of the rankings, but for me it’s come really for me through playing a lot of cricket,” added Nottinghamshire seamer Broad, who at 29 is three years younger than Steyn. ALSO READ: Shane Watson names Dale Steyn, Stuart Broad as toughest bowlers he faced in Tests

“I’ve played 40-odd Tests on the bounce now, so I’ve been out there having the opportunity to take wickets and bowling within a bowling unit that’s creating a lot of pressure,” said Broad. “It’s always nice when you do get to a ranking like that, but it’s not something I focus on a huge amount,” added the England mainstay, who has a narrow lead at the top of the Test standings from India off-spinner Ravichandran Ashwin.

Broad, the son of former England opening batsman turned International Cricket Council match referee Chris Broad, was clear where his goals lay. “For me, it’s all about trying to take top-order wickets and get us into a winning position,” he said. “When you finish your career, you don’t look back on where you got to in the rankings, you look back on Test match wins and what the team wins.” ALSO READ: Dale Steyn: Extreme pace cannot be taught

Broad has a reputation as something of a ‘streaky’ bowler who can produce unplayable spells such as the one on his Trent Bridge home ground last year where his stunning return of eight for 15 set up England’s Ashes series-clinching win over Australia. But Broad believes he has become increasingly consistent. “I feel with a bit of experience, I know what I’m looking for as a bowler now, know what tempo I’m trying to find in my run-up,” he said.

Broad’s new-ball partnership with James Anderson has become one of the most celebrated in English cricket history. But they’ve generally been known as ‘Anderson and Broad’, with the Lancashire seamer, England’s all-time leading Test wicket-taker, having the privilege of choice of ends. “I’ve never bowled down the hill at Headingley, that’s my aim next week — to try to get a spell down the hill,” joked Broad ahead of the first of a three-Test series against Sri Lanka starting at Yorkshire’s headquarters in Leeds, northern England, on May 19.

On a more serious note, Broad said: “I’m not a big away swinger, Jimmy always swings the ball away, so the dream is a bit of a cross-wind. He can choose the end that helps him swing it away.” 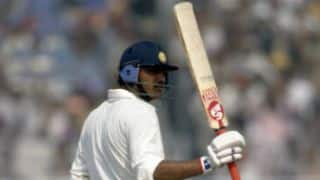 With Clive Radley, a Middlesex legend