England all-rounder Stuart Broad said his team’s fantastic record at Trent Bridge will see them go into the first Test with an advantage over India when the five-match series starts here on Wednesday.

“Out of the last seven Tests here, I think we have won five so we have a good record. James Anderson’s record here is brilliant and Ian Bell has got some 500 runs here in the last four innings or something. This gives us confidence,” said Broad in a pre-match press conference.

“Only Gautam Gambhir, MS Dhoni and Ishant Sharma have played Test cricket in England before so that is an advantage we have over India,” he added.

Broad, who is currently the Twenty20 (T20) captain of England, also cautioned the hosts of complacency.

“But we also have a lot of players who haven’t played at this ground, so we have to show our experience with the lengths we bowl here, getting the batsmen to drive and show how the slips can be in the game.

“So a lot of communication about that is going on in the changing room. Having watched the Indians in South Africa and New Zealand, their batsmen really adjusted well to conditions there, so I think it will be a very interesting series to watch,” said the Nottingham-born player.

England’s major issues heading into the series pertain to skipper Alastair Cook‘s poor batting form, which has also impacted his leadership skills especially after Sri Lanka won their first-ever Test series here. But Broad is confident that their star batsman will come good in this series.

“Cook is our best run-getter, our highest century-marker.

But he hasn’t got one hundred in nearly a year now so he will be desperate to score some runs. We know he is a quality player and when he gets in, he goes big. Whether it?s here, or at Lord’s or at The Oval, some time in this series he will get in and I don?t think he will get a hundred then, but a daddy hundred as he calls them,” said the all-rounder.

Broad, 28, was also all praise for captain Cook and said that the veteran surely knows how to deal with critics.”As far as captaincy goes, he has always been someone who goes back to his farm and shuts off, so criticism isn’t much of a problem. One of the reasons he has played 100 Tests for his country is because he knows how to shut criticism out and take positives from things. We obviously support him in that changing room. And Cook is developing and learning as captain,” he said.Broad, who has bagged 238 Test wickets in 67 matches, said that the bowling unit will certainly have to shoulder the responsibility against the visitors.

“At the same time, bowlers have to take a lot of responsibility and figure out how they want to bowl to a particular batsman. We have to analyse where Indian players will get out and where they will score. At the end of the day captain is only as good as the players he has got,” he opined.

England have been successful against the visitors in their last two Test encounters, taking the 2011 home series 4-0 and then wining a historic series in India in 2012-13. To continue this good run, Broad pointed out that the hosts will have to target a key Indian weakness bowling.

“On paper the Indian squad in 2011 was phenomenal. But they didn’t really settle down as their playing eleven kept changing a lot. This team is a bit more settled in the past one year though they have struggled a bit abroad but it hasn’t been because of a lack of runs. They just have trouble taking 20 wickets overseas which might lead them to play five bowlers in England,” he said.

A major factor in England’s success against has been their bowling attack with James Anderson and retired spinner Graeme Swann leading the way. Broad has been quite instrumental himself, though things seem to have changed at the moment with the burn-out issue in a long summer on top of their minds. 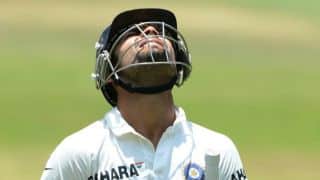 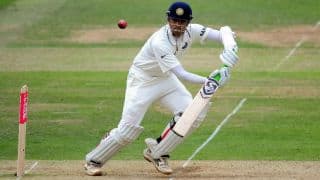