The fall of Joe Root s wicket on the last ball of day four Sunday left England calling for a hero to salvage a draw in the first Test against New Zealand in Auckland.

England s position at 132 for three, 237 in arrears, revived memories of the cliffhanger Test the last time the sides clashed here in Auckland five years ago, when the match went down to the final ball.

On that day in 2013 at Eden Park England started 390 behind with only six wickets remaining, but batted the whole day and survived the final three overs with nine wickets down to claim a nail-biting draw.

With Root out to a fired up Trent Boult late Sunday, England go into this final day with seven wickets available to avoid an innings defeat.

At stumps England were 132 for three after Root departed for 51 and Mark Stoneman was out for 55.

Alastair Cook went early for two while Dawid Malan was not out 19.

We’ll need a hero, fast bowler Stuart Broad said at close of play. Five years ago Matt Prior was the hero with 100 and someone’s got that chance tomorrow. It was a real shame to lose Joe on the last ball of the day, we all felt that after he played so brilliantly for his 50. But it proves there’s runs to be had out there.

Root had just suffered a painful blow to the index finger of his right hand, and on the next ball edged Boult to be caught behind.

Broad had sympathy for his skipper, but as a bowler who took three for 78 when New Zealand batted, he also expressed respect for Boult s skill.

You’ve got to credit the bowler sometimes. A good bouncer to wrap a batter on the finger then a good follow-up, well bowled, he said, but added that England were still in the match.

If we get a bit of luck tomorrow and we’re disciplined we can see out this day.

New Zealand begged to differ, with their top-scorer Henry Nicholls saying the Black Caps had the momentum going into the final day.

Root is obviously a quality player and it was certainly a nice way to end the day, said Nicholls, who finished his own innings on an unbeaten 145.

It’s going to be a nice day five, bowling (for) seven wickets to win a Test match.

England were in immediate strife in their second innings with Cook out in the third over to Boult, who finished the day with two for 24.

New Zealand had declared their first innings on 427 for eight, setting England a target of 369 to avoid an innings defeat.

The timing of the declaration gave the hosts 50 minutes to bowl at England before dinner in the day-night Test and then have another crack in the final, twilight-to-dark period.

The innings was only into its third over when Cook was dismissed, and when the swing started to fade Neil Wagner used his bouncers in the final session to remove Stoneman to reduce England to 94 for two.

Nicholls had shown when he was at the crease that there were no demons in the wicket.

He and Kane Williamson, who scored 102, laid the foundations for New Zealand’s crushing lead despite rain interruptions which reduced days two and three to a total of 25 overs.

After resuming Sunday on 233 for four in sunshine, New Zealand added 194 for the loss of four more wickets.

Watling went for 31, Todd Astle for 18, Colin de Grandhomme made a quick 29 and Tim Southee was out for 25.

Broad ended with three for 78 and James Anderson took three for 87. 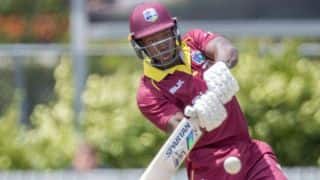