Skipper Misbah-ul-Haq and Asad Shafiq steadied Pakistan's innings after England paceman Stuart Broad took two wickets in the post-lunch session on the opening day of the second Test on Wednesday. 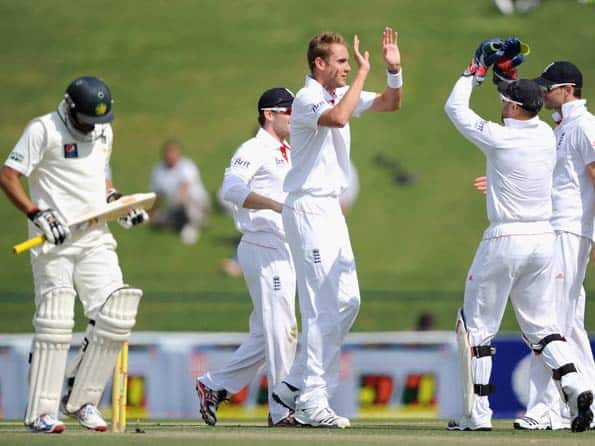 Skipper Misbah-ul-Haq and Asad Shafiq steadied Pakistan’s innings after England paceman Stuart Broad took two wickets in the post-lunch session on the opening day of the second Test on Wednesday.

Broad dismissed Younis Khan (24) and Azhar Ali (24) to give England a further edge after they dismissed Mohammad Hafeez and Taufiq Umar early to derail Pakistan, who won the toss and batted on a turning Abu Dhabi Stadium pitch.

Pakistan reached tea at 177 for four with Misbah (32) and Shafiq (39) adding 74 for the unbroken fifth-wicket stand.

England, aiming to level the three-Test series after losing the first Test by 10 wickets in Dubai, were rewarded for picking two spinners in Graeme Swann and recalled left-armer Monty Panesar as they introduced spin in the 10th over.

Hafeez and Umar, who put on 114 for the opening wicket in the first Test, negotiated the first hour without any discomfort before Swann gave England the breakthrough.

Umar misjudged a delivery and lost his off stump after seemingly playing no stroke on 16.

Panesar, brought in to replace paceman Chris Tremlett – flying home after a recurrence of a back injury – dropped Hafeez off his own bowling but had the Pakistani opener bowled off the very next ball.

Hafeez made 31 with four boundaries.

Broad then chipped in with the wickets of Younis and Ali, both bowled on incoming deliveries to leave Pakistan struggling at 103-4.

Misbah hit Panesar for two towering sixes and benefited from a dropped catch when on 30 as James Anderson failed to hold a sharp chance in the slips.

The inclusion of Panesar, playing his first Test since the July 2009 Ashes Test in Cardiff, is the first time England have played with two spinners since the Dhaka Test against Bangladesh in early 2010.

Pakistan also made one change from their first Test line up, bringing in left-arm paceman Junaid Khan for Aizaz Cheema.(AFP)