Broad was hit on the nose during the fourth Test at Old Trafford.

England paceman Stuart Broad might wear a protective mask to play in the final Test against India after he suffered a broken nose during the fourth match, which the hosts won by an innings and 54 runs. Broad was struck by a bouncer from Varun Aaron during England’s fourth Test win at Old Trafford on Saturday. He has been named in an unchanged 13-man squad for the fifth match at The Oval, which begins on Friday.

Broad tweeted on Sunday that he was a little bit sore but not too bad, and showed his enthusiasm for the fifth Test by adding ‘On to The Oval! (With a mask)’ to his tweet. The Nottinghamshire all-rounder will see specialists this week before a decision is made on his fitness. Broad had hooked Aaron for successive sixes but, looking for a repeat, top-edged the ball between the grille and peak of his helmet.

The pace bowler retired hurt on 12 and did not take the field in India’s second innings, heading to hospital where X-rays confirmed a fracture, the report added. 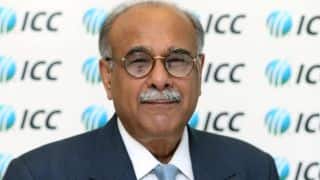