Virat Kohli and Ajinkya Rahane were batting sensibly at lunch.

India went to lunch in a precarious position against England on Day Three of the third match at Southampton. On a flat deck where very little help was on offer for the England pacers, Stuart Broad steamed in and got rid of both overnight batsmen, Cheteshwar Pujara and Murali Vijay. New men Virat Kohli and Ajinkya Rahane were looking secure against the probing English bowling as they ensured India suffered no more setbacks.

Vijay was bowled by Stuart Broad off an inside edge while trying to leave a delivery, while Pujara was dismissed caught behind by Jos Buttler while trying to evade a short ball from Broad that followed him viciously and took the edge. Broad was breathing life into an otherwise facile pitch, and made sure that India enjoyed no respite whatsoever.

Pujara and Vijay started well, with the former looking secure enough to inspire confidence that he would finally make a substantial contribution. A straight drive he played off a quick delivery stood out as a sign of things to come. Meanwhile, Vijay was content with leaving and blocking the ball, occasionally slashing through point to get a few runs.

However, both batsmen were picked up by Broad, who was by far the most impressive man on display in the first session. On a pitch where Chris Jordan was wayward and expensive, Broad kept the batsmen on their toes and did not allow them to settle down.

Earlier, India resumed at 25 for one on Day Three. James Anderson kept asking questions of the batsmen, but Chris Woakes looked largely nonthreatening. The introduction of Broad proved incisive, as he came in hard and sharp, and eventually got rid of both overnight batsmen. 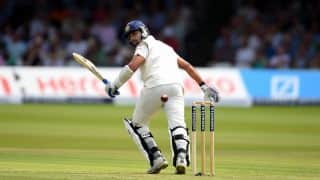 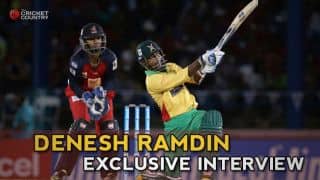