Stuart Broad, the man-of-the-match of the Chester-le-Street Test, said a pep talk involving him and Tim Bresnan was responsible for the home team's thrilling 74-run victory over Australia in the fourth Ashes Test on Monday. Stuart Broad, the man-of-the-match of the Chester-le-Street Test, said a pep talk involving him and Tim Bresnan was responsible for the home team’s thrilling 74-run victory over Australia in the fourth Ashes Test on Monday.

“Bressy and I got together and said, ‘Come on we can really put the squeeze on here, build the pressure’,” Broad told reporters after England took an unassailable 3-0 lead in the five-match series reports Reuters.

“You don’t think about wickets, you just think about bowling dot balls and building pressure that way. With that we created chances,” said Broad.

Australia  appeared well on course for their first win in the Ashes Test after David Warner (71) and Chris Rogers (49) put on 109 for the first wicket in their pursuit of chasing 299.

An inspiring bowling performance from Broad (six for 50), Bresnan (two for 36) and Graeme Swann (two for 53) then sparked a collapse that saw Australia getting bowled out for 224.

“I think we gave away far too many four balls in that middle session of the day and we tried to cut those out,” said Broad, who also claimed five for 71 in the first innings.

The moment England picked up Rogers that sparked a sensational collapse. “Once we got one wicket, the crowd got behind us and with that the team were really lifted,” said Broad.

The ball started to reverse in the late afternoon session. Broad said that England were very strict with their reverse swing, throws and handling the ball. The swinging ball put a lot of doubt in batsman’s mind which brought back the game in England’s favour.

Captain Alastair Cook was delighted with England’s performance in the field. He said that his team built incredible amount of pressure courtesy of good bowling.

Cook said his players have learnt over the years how not to panic under pressure.

“As a side in these last 12 months, and before that under [former skipper] Andrew Strauss as well, we have come through tough situations well,” he explained. 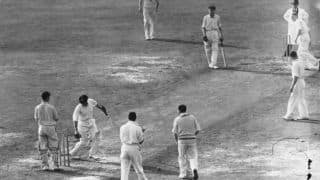