Broad sustained a nose injury when he was hit by a Aaron's delivery during 4th Test.

Stuart Broad posted a picture of the injured nose which he sustained during the fourth Test between India and England at Old Trafford, Manchester on Sunday.

Indian pacer Varun Aaron bowled two short deliveries, which Broad easily smashed for consecutive sixes. On the third ball, Aaron came round the wicket and the short ball top-edged the bat and went straight through the grill of his helmet. Despite the helmet protecting Broad from major injury, Broad got a nasty hit on the nose.

The Nottinghamshire bowler was instantly taken off the field and did not come to the field.

England expect Broad will be able to play the fifth and final Test against India at The Oval next week despite the pacer suffering the broken nose.

“X-rays confirm a fractured nose,” an England and Wales Cricket Board (ECB) spokeswoman told reporters at Old Trafford after England, with Broad off the field, completed a spectacular innings and 54-run victory inside three days to go 2-1 up in the series.

“He will have treatment over the course of the week and the medical team anticipate he will be available for the fifth Test.”

Immediately after he was hit, Broad signalled for the England physiotherapist to come on and, after several minutes of on-field treatment, with blood coming out of a nose wound, walked off as he retired hurt on 12, with England then 338 for eight.

“Amazing win that!! Watched the last 8 wickets in a hospital! 2-1 One to go come on boys!,” tweeted Broad from his hospital bed. 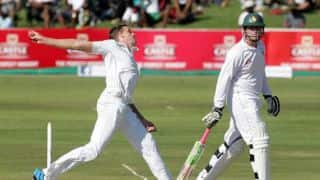