Stuart Broad will miss the five ODIs and one-off T20 against India if he undergoes surgery.

England‘s hero on the opening day of the ongoing fourth Test, pacer Stuart Broad has confirmed that he will undergo a knee surgery after the conclusion of the five-match series against India.

“It’s been confirmed I’m going to have an op. The timing is not confirmed but the fella is flying over from Sweden after the Oval Test (the India series finale) to have a look. It will either be after that Test or after the one-day series, depending on what he suggests,” Broad told reporters.

Broad ripped through the Indian batting at Old Trafford, packing off the visitors for 152 by bagging six wickets while sharing the new ball with Jimmy Anderson, who scalped three.

The pacer though is having some trouble with his knee for quite sometime and wishes to utilise the period after the Oval Test to get the injury sorted.

“At any stage in the last 18 months I could have had the op and it’s at the stage where it needs to be done,” he said.

But if the pacer does get the knee operated after the fifth Test then the national Twenty20 skipper will certainly miss the five one-dayers starting August 25 and the one-off T20 slated for September 5 as the estimated recovery period from the operation is 14 weeks.

Broad, though, is more concerned about getting fit for next year’s ICC World Cup 2015 in Australia and New Zealand, which starts in February.

“I should be fine (for the World Cup)…it’s about three, three-and-a half months. It’s actually a really good opportunity for me to get the knee sorted and to use it as a strength and conditioning period,” he said.

Broad, whose six-wicket haul in his 73rd Test saw him move past his friend Graeme Swann, helped him take the sixth place in England’s all-time list of most successful Test bowlers with 261 wickets.

Meanwhile Anderson, with his three wickets (overall 374) also moved closer to Ian Botham’s tally of 383 wickets, and Broad is more than happy for his pace bowling partner.

“But it’s all eyes on Jimmy at the minute. He needs nine or 10 to beat Beefy (Ian Botham). That will be hugely exciting and I want to be around when that occurs.

“For him to be the first (English) bowler to 400 would be pretty special,” he added. 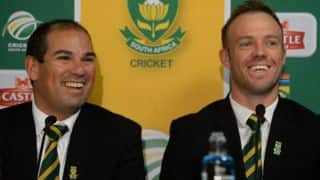