Broad was named in the England squad to take on India in the fifth and final Test of the series.

England all-rounder Stuart Broad’s helmet makers, Ayrtek, announced on Monday that they would be investigating the incident in which the cricketer’s nose was broken. Broad was hit in the face by a bouncer while batting against India pacer Varun Aaron. The ball went through the grill, resulting in the cricketer leaving the field with his face dripping blood.

The company which manufactures the helmet, Ayrtek said in a statement, “Most importantly we would firstly like to wish Stuart [Broad] a speedy recovery from his injury. At Ayrtek, player safety is our number one priority.  Any incident of this nature happening to a player, particularly when wearing our product, is something we take extremely seriously.”

“We will be investigating the incident by gathering as much information as possible and working closely with the ECB [England and Wales Cricket Board] medical team to assess the likely cause. In six years of manufacturing cricket helmets, this is the first injury of this type to have happened to a player wearing an Ayrtek helmet. All of our helmets undergo rigorous safety testing in accordance to BSI standards,” the release added. Meanwhile, Broad was named in the England squad to take on India in the fifth and final Test of the series, starting August 15 at The Oval. 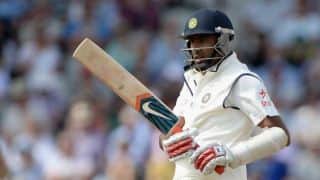