The attacker detonated the bomb after he was stopped at a security checkpoint as he walked towards the stadium where a match was under way.

Kabul: A suicide bomber killed three people including a policeman and wounded five others after blowing himself up near a cricket stadium in the Afghan capital Kabul today, police said. The attacker detonated the bomb after he was stopped at a security checkpoint as he walked towards the stadium where a match was under way. “The security forces by sacrificing themselves have prevented the attacker from reaching the crowd (inside the stadium) and creating a catastrophe,” police spokesman Basir Mujahid told AFP. Two of the wounded were police officers.

Several ambulances were seen speeding away from the scene, apparently taking the injured to hospital, an AFP reporter said. The blast happened during a cricket match inside the stadium, Farid Hotak, a spokesman for the Afghanistan Cricket Board (ACB), told AFP. The game was briefly interrupted, Hotak said, adding “all players and cricket board officials are safe”.

The Shpageeza T20 League Afghanistan’s domestic league in the shortest format which also has overseas players taking part in it. Players such as Herschelle Gibbs has been associated with the tournament as coach.

#SCL2017 match resumes after delay caused by explosion in #Kabul

However, the blast could not lessen the enthusiasm of the local crowd or the players as the tournament continues despite the massacre. 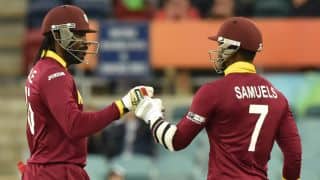