Virat Kohli, who is an active football enthusiast, recently congratulated the Indian Team over tweet for winning the SAFF Cup against Afghanistan. India won the match by a 2-1 scoreline. Afghanistan were the first to score in the match with Zubayr Amiri scoring a goal in the 70th minute. However, India settled scores soon after with Jeje Lalpekhlua scoring a goal only two minutes later. The tone was set for the match to end in a tense manner. Sunil Chhetri ended the speculation and Afghanistan’s hopes of defending the title by scoring in the 101st minute (extra time). Chettri re-tweeted saying, “@imVKohli Thank you skipper,I’m certain our boys won’t need any extra time to get the job done in Australia.All the very best.” ALSO READ: Virat Kohli congratulates India football team for win over Afghanistan in SAFF Cup final

Kohli remains committed to cricket but is an active football enthusiast on the side which is testified in the fact that he holds shares in the FC Goa team in the Indian Super League (ISL) and is also their brand ambassador. His Goan team made it to the finals of the tournament this year where they were defeated by Chennayin FC. Kohli made special mention of Chhetri’s deciding goal in his tweet celebrating India’s victory describing the goal as ‘mind-blowing’. He also pointed out that this was the seventh instance of India winning the SAFF Cup. “Congratulations Team India for lifting the SAFF cup for the 7th time. That extra time winner from @chetrisunil11 was mind blowing! #INDvAFG,” Kohli’s tweet read. ALSO READ: Virat Kohli highest paid player in IPL

Kohli’s next focus is on the limited overs tour of Australia. The tour consists of five One-Day Internationals (ODIs) and three Twenty20 (T20I) games. MS Dhoni remains captain for ODIs and T20I while Kohli will be the vice-captain.

@imVkohli Thank you skipper,I’m certain our boys won’t need any extra time to get the job done in Australia.All the very best.

Kohli is one of the most popular sporting figures in all of India owing to his batting performances and the fact that he is now the Test captain has boosted his profile. 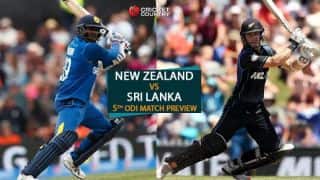