Sunil Gavaskar feels that MS Dhoni may have used the wrong word to describe the situation.

Former India captain Sunil Gavaskar defends MS Dhoni for his “unrest” comment saying that he may have chosen the wrong word to to describe the situation. Dhoni had made the comment after the Test at Brisbane, which seem to have implied that there was a rift between batsmen Shikhar Dhawan and Virat Kohli.

“He [Dhoni] probably used the wrong word. He might have said that there was a bit of ‘uncertainty’. I think instead of uncertainty he said unrest, because there was a bit of uncertainty whether Shikhar [Dhawan] will bat or whether Virat [Kohli] will have to go in immediately. So that was probably the word he might have wanted to use. Often you don’t get the right word in a live interview,” Gavaskar said, as reported by NDTV.

“Now that he has come out in the open and clearly said that there is no rift between Virat and Dhawan I think we should accept the captain’s word. To doubt the Indian skipper is not the right thing to do. If he has said nothing, then it is nothing,” the former captain said.

“I think what Smith would have said would have been a reaction of what he must have seen come out in the media about the differences of opinion between two players. But I don’t think we really should pay too much attention. That is what modern day cricket is, to try and create some sort of a situation in the opponent’s mind. I think that is what the Australian’s are doing,” Gavaskar said.

Gavaskar still believes that India can win put up a good performance and win the remaining Tests. “India will have to really lift themselves up mentally more than anything else because they are 0-2 down. If they can do that and put up enough runs against Australia, anything can happen. In fact this and the Sydney Test, where the ball can turn a bit, are the two best opportunities for India,” he said. “But India have to really go out there, not just hundred per cent but more than that to give themselves a chance,” he added. 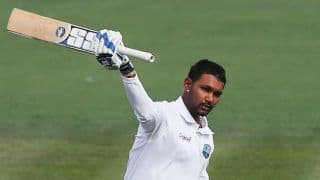