New Dehi: Former India skipper Sunil Gavaskar rejected criticism of the pitches in the ongoing Test series against South Africa, and said the blame rather lies with the Proteas batsmen, who lack “application, technique and temperament”. India won the first and third Test matches in Mohali and Nagpur, respectively with games ending withing three days on turning tracks and that invited a lot of criticism of the pitches from different quarters. The Kotla pitch here is considered to be far better than the previous ones, but South Africa still faltered, getting bundled out for a mere 121 in reply to India’s 334. Live Cricket Scorecard: India vs South Africa 2015, 4th Test at Delhi

“In Nagpur also there was nothing in the pitch, which turned a little bit. If you are expecting to play on pitches, where the ball is going to come straight, then honestly one should go on the road and play, because only on roads the ball would come straight to you. “Different conditions are there in different countries. Live cricket updates: India vs South Africa 2015, 4th Test, Day 2 at Delhi

And one should be prepared to accept that South Africa’s batting lacked application, technique and temperament,” said Gavaskar. Applauding Ajinkya Rahane (127) for his superb century, Gavaskar said had South Africans taken a cue from the Indian middle-order batsman, their scorecard could have looked better.

“Rahane played marvellous cricket. His was a typical Test innings. He played close to his body. If his example was followed by the South Africans, then their scorecard would have looked different.

“The way some South African batsmen played today, the pitch cannot be blamed. One should not complain about the pitch. It was a very ordinary batting by them,” he added. 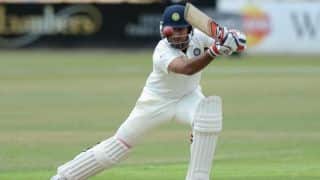