Yuzvendra Chahal's no-ball saw David Miller gain a reprieve as he went to change momentum in favour of South Africa.

Sunil Gavaskar has come down heavy on Yuzvendra Chahal following his performance in the fourth ODI between India and South Africa. Chahal was guilty of bowling a no-ball that probably changed the course of the game. He cleaned up David Miller off a no-ball that turned momentum in South Africa’s favour. Heinrich Klaasen made an unbeaten 43* that South Africa clinch their first win of the ODI series.

Gavaskar speaking to Sony Ten 1, said: For me, it was that no-ball where David Miller was clean bowled and the way he recovered from it. That, for me, was the turning point. Till then, India seemed to be in control, they had also seen the back of AB de Villiers, who was batting well. When Miller was struggling to read Yuzvendra Chahal, India were certainly in the driver s seat.

According to Gavaskar bowling no-balls in modern day cricket is a sin. He said: I will be perfectly honest. In modern day cricket, with all the technology available, nobody should be bowling no balls. One can understand bowling a wide, down the leg side because that [wide rule] is a very strict interpretation. There should ideally bowl no wides on the offside also.

He went on to say that India were unprofessional in the field as well. He concluded, So clearly, I think there s little bit of lack of professionalism there. Maybe a little bit of relaxation after the 3-0 situation and the South Africans took full advantage of it. They batted brilliantly after that, Miller batted brilliantly, [Heinrich] Klaassen was outstanding, [Andile] Phehlukwayo came in and smashed it.” 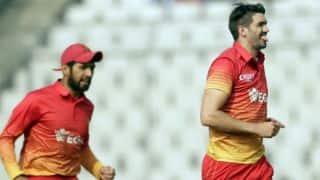