Sunil Gavaskar: Not continuing with Ravichandran Ashwin was a mistake

Sunil Gavaskar: Not continuing with Ravichandran Ashwin was a mistake

Sunil Gavaskar slammed for not using Ravichandran Ashwin on third day morning and giving Sri Lankan batsmen plenty of time to settle down.

Former India skipper Sunil Gavaskar questioned Virat Kohli’s tactics of not persisting with Ravichandran Ashwin after lunch on the first day of the first Test. In his column for Times of India, Gavaskar writes, “As feared the fourth innings turned out to be the toughest in the Galle Test match. India unfortunately having lost the toss had to bat fourth but have only themselves to blame for having to chase as many as they had to. They had the Lankans on the ropes at lunch on the first day but allowed them to get up and add valuable runs. Ravichandran Ashwin, who had bowled splendidly and captured three out of the five wickets that had fallen was strangely not continued immediately after lunch and Harbhajan Singh brought on.” READ: Give Virat Kohli time, folks

“Unfortunately the veteran off-spinner was unable to get the same kind of spin from the surface as his younger off-spinning team mate. The pressure thus released, the Sri Lankan skipper Angelo Mathews and Dinesh Chandimal realising that the ball was not turning as much as it had before lunch launched a counter attack. When Ashwin was brought back after a little over an hour he immediately struck and by the next hour the Lankan innings was over with Ashwin bagging six wickets.” READ: Virat Kohli scores four centuries in his first four Tests as captain

“When Shikhar Dhawan and Virat Kohli hit calm, collected and measured hundreds and Wriddhiman Saha chipped in with 60, it looked as if the lead would be sufficient to ensure either an innings victory or that the Indians would have to chase around 70 runs.”

Gavaskar slammed for not using Ashwin on third day morning and giving the Sri Lankan batsmen plenty of time to settle down. “The next morning Ashwin was again ignored and the ball was shared by the two new ball bowlers for almost an hour by which time Kumar Sangakkara and Angelo Mathews had settled down and added important runs. Admittedly the ball was still new but with the kind of hold Ashwin had on the Lankan batsmen it made sense to have had him bowl a few overs from the end from where he picked wickets. When Ashwin came on he quickly got rid of Sangakkara but by then the Lankan batsmen had realised that the way to go was to attack the bowling.” 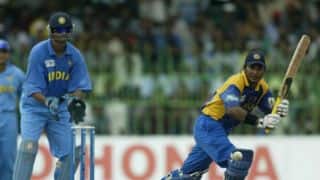 Rahul Dravid salutes Kumar Sangakkara ahead of his last Test

Chris Gayle reminiscences his 333 in style!