Mumbai: Former India captain Sunil Gavaskar Thursday slammed the MCC’s recommendation that single-make balls be used in Test cricket, saying that it would be “unfortunate” if the suggestion, which will take away the challenge of playing in overseas conditions, is considered seriously.

The World Cricket Committee of the Marylebone Cricket Club (MCC), called the custodian of the game’s laws, has proposed the use of a standard ball in the inaugural World Test Championship, which takes place after the World Cup in May-July.

“That (MCC) World Committee is like Cricket Club of India or the National Cricket Club in Kolkata or Madras Cricket Club in Chennai. It is pretty similar to that, the MCC is saying our committee should (be) listened to (more than the) ICC Committee. And unfortunately, a lot of people take them seriously,” he added.

At the moment, the SG ball is used in India, Dukes in England and the West Indies, and Kookaburra in other countries including Australia and South Africa.

Players have expressed their ball preference in recent times, including India skipper Virat Kohli and premier offspinner Ravichandran Ashwin. They gave their vote to the red Dukes. (ALSO READ: Quality of SG balls have dipped, Dukes should be used worldwide: Virat Kohli)

A shot clock to prevent time wasting and free hit for a no ball are among the other steps proposed by the MCC to spice up the longest format.

“One gully there might be something, which is just across, you can’t hit the straight ball, there might be a policeman there, there might a fish vendor coming there (while the play is on), which might not happen in next gully, so you cannot standardise. (ALSO READ: MCC mulls shot clock to improve over-rates in Test cricket)

“The whole idea of cricket and why players are recognised as being good or great is when they do well overseas, unfamiliar conditions,” Gavaskar added.

The batting great also ridiculed queries on his prediction for India’s chances at the Word Cup, which starts May 30 in England. 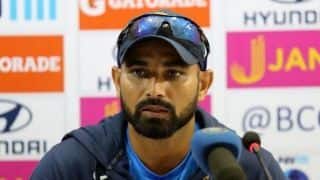