Ravichandran Ashwin has 4 Test hundreds to his name and a career batting average of 30.34.

An average of 30.94 in Tests is no easy task, when one comes in at No.6 or 7. Ravichandran Ashwin, has taken this mantle over himself and proved to be a handful for India in the past. His recent string of failures has legend Sunil Gavaskar irked.

As reported by Times of India, Gavaskar has urged Ashwin to work more on his batting and be thoughtful about it going ahead. He said: “Kohli’s splendid century kept India in the game as they closed in on the South African total. It was as good a Test century that one could hope to see. It had everything, technique, temperament, solid defence and exquisite strokes. If only Ashwin, who batted so well, hadn’t had a rush of blood and wafted at the first over of the second new ball, India could well have taken the lead.”

Ashwin made a 54-ball 38 in India’s second innings at Centurion against South Africa.

He further adds, “Ashwin puts so much thought into his bowling trying to be better than the previous day. If he puts a fraction of that in his batting, he would score more heavily more often. How many times has he been dismissed trying to play on the rise around the off-stump against the moving ball? He has four hundreds against the West Indies but they don’t have a single swing bowler who would tempt him to go for the expansive drive outside the off-stump. If he starts analysing his dismissals, he will realise that it’s he who has got himself out and the bowler hasn’t deceived him.”

India are currently 252 runs away from win and have just 7 wickets in hand with Virat Kohli sitting back in the pavilion.

Speaking about India’s strategy going ahead Gavaskar said: “India must believe they can win this game. The pitch is getting a bit up and down, as was seen with the dismissals of Amla where the ball kept a bit low and de Villiers where the ball jumped from a length. So chasing won’t be easy at all, but like their captain if the Indian players believe they can do it, then they certainly can. It’s been attritional cricket so far but that’s simply due to the pitch, which has not allowed the bat to dominate nor the ball to rule.” 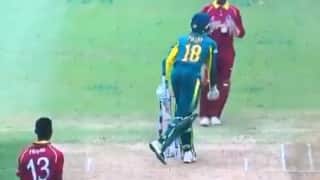 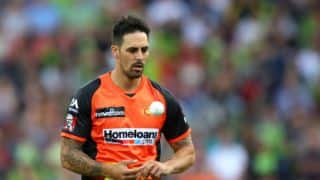 Mitchell Johnson pulls out of PSL 2018