Mystery off-spinner Sunil Narine has described his unexpected call up for the Test tour of England as a dream come true. 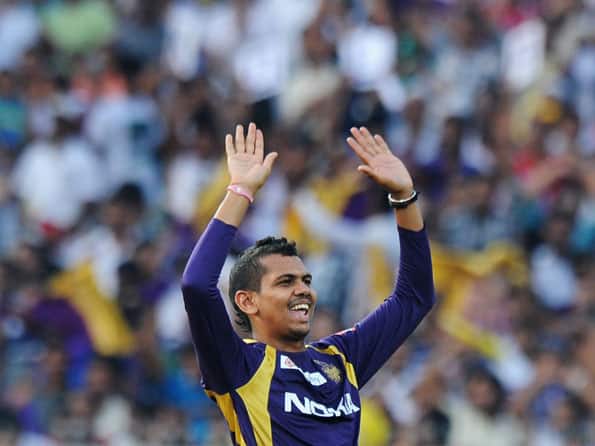 West Indian spinner Sunil Narine bemused batsmen in the Indian Premier League 5 to take 24 wickets at an excellent economy rate of 5.47 but was unavailable for the first two matches of the Test series in England AFP

Mystery off-spinner Sunil Narine has described his unexpected call up for the Test tour of England as a dream come true.

The 24-year-old Trinidadian only returned home this week following his outstanding campaign in the Indian Premier League (IPL) where he was voted Man-of-the-Series after helping Kolkata Knight Riders to their first-ever title.

“It all feels like a dream. I wasn’t expecting this at all. I came back home and I was starting to look ahead to the limited-overs series (in England),” Narine said.

“When I got the call for the Test series…words can’t explain how I felt at that moment. The dream was always to play Test cricket and I am halfway there.”

The whole year has been a bit of a dream for the wily right-armer.

He claimed seven wickets at an economy rate of 4.36 to help Trinidad and Tobago win the Caribbean T20 Championship in January, before snatching 31 wickets in just three first class matches at an amazing average of 9.61.

In the subsequent one-day series against Australia in March, Narine was again outstanding, grabbing 11 wickets, but was unavailable for the three-Test series because of his IPL commitments.

In India, he bemused batsmen to take 24 wickets at an excellent economy rate of 5.47.

With the IPL behind him, Narine said he hoped to make his Test debut in the third and final Test at Edgbaston starting next Thursday.

“I am looking forward to joining the team this weekend and being part of the good work that is happening in West Indies cricket at the moment,” he said.

“I am always looking to watch, listen and learn. I would like to play in the last Test and try to help West Indies pull one back, but even if I don’t, I won’t be too despondent.”

“We have the One-day Internationals and a Twenty20 International coming up and if I am in the squad for those games, the time in England would help me get fully prepared for the upcoming matches.”

The West Indies trail 0-2 in the series after losing the opening Test at Lord’s by five wickets and the second Test at Trent Bridge by nine wickets inside four days last Monday.

Strike bowler Kemar Roach, who led the attack in the opening Test, was on Wednesday ruled out with injury, forcing selectors to call up Narine.

Narine said he was fully aware that despite his success in home and sub-continent conditions, bowling in England would require some adjustments.

“I have not played a lot in England so it will be vital that I get acclimatised as quickly as possible,” he said.

“I did well in the West Indies and I did well in India, but the pitches and conditions in England are different, so as a bowler you have to take your time to get ready and prepared.” (IANS)