New Zealand were up against it at stumps on the fourth day of their second Test against West Indies at North Sound after two breakthroughs for the hosts left them at 199 for 3, just 28 runs ahead. 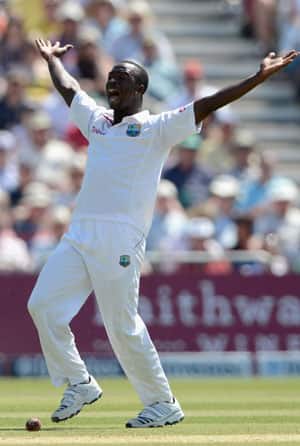 New Zealand were up against it at stumps on the fourth day of their second Test against West Indies at North Sound after two breakthroughs for the hosts left them at 199 for 3, just 28 runs ahead.

Looking to erase a 171-run first-innings deficit, opener Martin Guptill and Brendon McCullum strove manfully to move the Black Caps towards positive territory but both fell after taking the tourists to 170 for 1 at one stage in the final session.

West Indies spinner Sunil Narine, who pulled out a maiden five-wicket Test haul in the first innings, made the first breakthrough in the second innings after trapping Daniel Flynn lbw for 20 in an early blow for the Kiwis.

But thereafter Guptill, who just missed a century in the first innings, and McCullum piled on the runs before falling for 67 and 84 as Narine and Kemar Roach claimed their respective scalps.

Guptill and McCullum had put on 123 for the second wicket before spinner Narine had opener Guptill caught by Assad Fudadin at short leg.

Kemar Roach then bowled McCullum to leave nightwatchman Neil Wagner on four not out with skipper Ross Taylor on 11.

West Indies had earlier made the Kiwis’ opening tally of 351 look modest as they made 522 all out with skipper Darren Sammy instrumental in helping his compatriots to pass the 500 mark for the first time since Mumbai last year.

Sammy helped himself to a six over deep midwicket to bring up his third Test half-century before falling next ball to Daniel Vettori.

They reached the mark when Narine hit a boundary off Vettori before getting himself run out two balls later.

It then fell to Doug Bracewell to end the West Indies’ first innings as he trapped Ravi Rampaul lbw for one before Guptill, who scored 97 in the first innings for the New Zealanders, and Flynn padded up to start chasing down the target.

Although Guptill and McCullum made light of the loss of Flynn their own demise suggested the West Indies, cheered by centuries from Chris Gayle and Kieran Powell and 79 from Narsingh Deonarine, looked the likelier victor. (AFP)

Why the Duke ball gives a very unfair advantage to England