Dwayne Bravo hailed Sunil Narine as one of the best bowlers in the world.

Kolkata: With star spinner Sunil Narine suspended for suspect action, West Indies allrounder Dwayne Bravo today said absence of the mystery spinner is a big loss and he would be hard to replace in the ICC World Twenty20 2016. “Narine’s absence is a big loss for us and any team. His four overs is crucial, he’s one of the best bowlers in the world. He is someone who can’t really be replaced. The team will miss him badly,” Bravo said at an interactive session here. “I personally wish him all the best for his return to International Cricket. We have to look beyond that and back his replacement Ashley Nurse. He’s not that big turner but he’s handy as a batsman. We still have a good position as a team.” ALSO READ: MS Dhoni’s collar grabbed by Dwayne Bravo during India vs West Indies ICC World T20

They were the champions in 2012 in Sri Lanka, but Bravo said it will be fresh start for his team. “Our chances is just as good as other teams. What happened four years ago is past. We have to focus on this tournament. We lost some key players but we still feel have the right balance. Our aim is to get top four then it will be anybody’s game,” he said.

Short on match practice because of the contract row back home, West Indies may find it difficult initially but Bravo said this format can be anybody’s. “I don’t think any group is easier. Anything is possible in this format. No 1 can be beaten by No 8. Every team has match winners.” 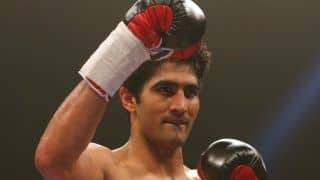