Sunil Narine is yet to pick up a single wicket even after two matches.

Kolkata: Kolkata Knight Riders (KKR) star spinner Sunil Narine, whose lethal deliveries brought down the best of batsmen in the previous editions of the Indian Premier League (IPL), is yet to pick up a single wicket even after two matches in the current edition of the Twenty-20 tournament.

Narine remained wicketless for the second straight game as the defending IPL champions went down to Royal Challengers Bangalore (RCB) by three wickets at the Eden Gardens here on Saturday.

Though at his miserly best conceding just nine runs off his first three overs, the offie haemorrhaged 17 runs in his last at a crucial juncture, that tilted the balance in the visiting team’s favour who chased down a stiff target of 178 with six balls to spare.

With RCB needing 31 off the last 18 balls, Knight skipper Gautam Gambhir summoned his spin ace hoping to contain the rampaging Chris Gayle, then on 78.

The big-hitting Jamaican treated Narine with disdain, hitting his first two balls for fours. Harshal Patel rubbed salt in his wounds with a towering six off the last ball and Narine finally finished with figures of 4-0-26-0.

Earlier, opening the bowling with pace spearhead Morne Morkel, Narine earned respect from RCB openers Gayle and Virat Kohli, accounting for just five runs in his first spell of two overs. The ‘mystery’ spinner had also failed to get a wicket on Wednesday in the game against Mumbai Indians, which the Knights’ won by seven wickets.

The KKR camp, though, exuded confidence that Narine would get his name in the wicket takers’ list soon. “The tournament has just begun. It’s only a matter of time before he starts getting wickets. He has been playing really well for us and will soon get wickets for the team,” KKR all-rounder Yusuf Pathan said in the spinner’s defence on Saturday.

Narine who played a key role in Knights’ twin IPL triumphs in 2012 and 2014, was barred from bowling for a suspect action last year but was subsequently cleared by the International Cricket Council (ICC) and the Indian cricket board. Bowling with a remodelled action, Narine has attracted a lot of praise from RCB skipper Kohli.

“It’s not that his action was the reason why he was bowling well. He has got the skill. Otherwise he won’t be bowling at this level and getting world class batsmen out. He has taken two hat-tricks in IPL. He is a class act,” Kohli had said Friday on the eve of the game against KKR. Pathan echoed Kohli, saying Narine’s changed action is not the reason for his failure to get wickets.

“I don’t think it’s about his bowling action. The entire tournament is still ahead of us.” The Trinidadian who has 67 wickets from 49 outings in the tournament over the years, was described as the ‘Man of the IPL’ by former India and KKR skipper Sourav Ganguly. 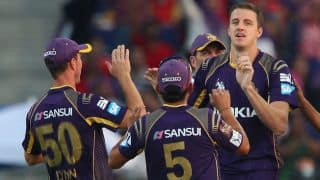