Bhuvneshwar Kumar has won Purple Caps in the last two editions of the IPL.

Ahead of the 11th edition of Indian Premier League (IPL), Sunrisers Hyderabad’s (SRH) experienced seamer Bhuvneshwar Kumar reckons that to lay their hands on the silverware, the team needs to look out for the “little things” which can make them champions.

The 28-year-old leading India bowler said the team needs to do “things correctly” through the tournament.

“Our aim is to win the championship but we know it’s not going to be easy because each team is equally good. So we have to do out things correctly throughout the tournament and look for the little things which will make us champions,” Bhuvneshwar told IANS during an event of the Red FM, which is the principal sponsor of the Hyderabad squad.

Among the two names to be retained by the Sunrisers before the auction along with banned David Warner, is rightfully Bhuvneshwar, the top wicket-taker in both the 2016 and 2017 editions.

When asked about any special strategy for the forthcoming edition, the Uttar Pradesh cricketer said that there are no special plans as of now but the team will soon draw up something before entering the meet.

On paper, apart from Bhuvneshwar, there are no big and experienced names in the bowling department to support him. The overall squad is also relatively young and new. Asked whether it will affect the team’s performance, the pacer said he didn’t really think so.

“It is not always about the big names in the bowling department. If you look at our bowling, Rashid (Khan) is there, Siddarth Kaul, who has done really well last year, is also there among few young players. So we have a decent bowling line-up which has done well in the last few years. I don’t think there will be any pressure or problem regarding the lack of experience,” Bhuvneshwar said.

“Inexperience does’t mean that you do not have the experience of international cricket. If you talk about IPL, in the SRH team, players have played the league at least four to five times. So it is more than enough experience to win the tournament,” he added.

Bhuvneshwar said a proper domestic set-up and IPL have helped India a lot as the country has produced several quality pace bowlers.

Unlike the 1990s when there were only one or two quality pace bowlers in the team, India now has several top pacemen like Umesh Yadav, Mohammed Shami and Jasprit Bumrah.

“It is difficult to tell the exact reason, but if you see our domestic set-up, it is really good. IPL has also been there for the last 10 years. There are good coaches also; so the credit goes to IPL as well. Yes, it is a shorter format but still gives you the experience and confidence to do well at different levels,” Bhuvneshwar said. 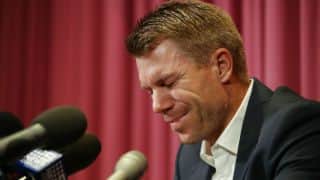