Tom Moody said the pleasing aspect from his perspective was SRH's capability to fight back.

Sunrisers Hyderabad (SRH) lost to Chennai Super Kings in the IPL Qualifier 1 just a few days back but their head coach Tom Moody said that his side would not think of the past match but focus on their brand of cricket in Sunday’s summit clash.

I am not looking here at what we need to tighten up. We need to concentrate on our brand of cricket and bring that to the final,” said Moody at the media conference today ahead of the final match at the Wankhede Stadium.

We all can recall the last game we played which we could have won by 20 runs. It was a remarkable comeback by CSK. Faf du Plessis played a remarkable innings and showed his class and experience, the former Australia cricketer said.

He said the pleasing aspect from his perspective was that his team has the capability to fight back.

Even last night a lot of people thought we were out of the contest after 7-8 overs, he said, alluding to the turnaround his team made at the Eden Gardens in Kollata against Kolkata Knight Riders in Qualifier 2.

Captain Kane Williamson, who has literally led from the front with the bat, said CSK were a formidable side. 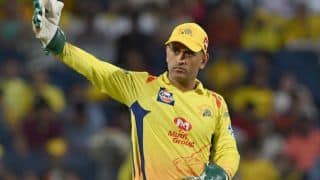