This will be SRH's fourth home game and will be eyeing their fourth win at Hyderabad. DD, on the other hand, will look to regroup quickly and get back to the winning ways.

After losing two games in a row, Sunrisers Hyderabad (SRH) notched an exhilarating win in their last match against Kings XI Punjab (KXIP). On the other hand, Delhi Daredevils (DD) are coming out from a hard-fought loss against Kolkata Knight Riders (KKR). Both teams will now clash against each other in Match No.21 of the Indian Premier League (IPL) at the Rajiv Gandhi International Stadium in Hyderabad. This will be SRH’s fourth home game and will be eyeing their fourth win at Hyderabad. DD, on the other hand, will look to regroup quickly and get back to the winning ways. FULL CRICKET SCORECARD, Sunrisers Hyderabad vs Delhi Daredevils – Match 21

Head-to-head statistics stand in favour of SRH. They have won 5 games against DD’s tally of 3 games. However, in IPL 9, Delhi triumphed in both (home and away) matches against Hyderabad. Heading into the clash, SRH will bemore confident of the two sides given their current form. With David Warner and Moises Henriques in good touch, their top order looks good. The main concern for SRH is their middle order.

Yuvraj Singh and Deepak Hooda need to come good, otherwise their place in the side is at danger. Naman Ojha showed calmness in the middle against Punjab. Afghanistan recruit Mohammad Nabi will be given one more chance to showcase his talent, while his compatriot Rashid Khan has been blowing the roof off with this bowling thus far. Bhuvneshwar Kumar and Siddarth Kaul will be persisted while Barinder Sran could get the boot. One could see the return of Ashish Nehra.

Delhi, on the flip-side, were guilty of playing lazy cricket. All their top-order batsmen gave their wickets away after decent starts. Sanju Samson and Risbabh Pant have been able to play consistently for them. Sam Billings himself has been getting starts but is not making the most of it. Indian domestic stars like Karun Nair and Shreyas Iyer will be expected to come good after string of failures. Corey Anderson, if fit, will return replacing Angelo Mathews.

Chris Morris and Pat Cummins will spearhead the bowling attack with Zaheer Khan, who has used his acumen to good effect in the middle. There might be a temptation to play Kagiso Rabada in place of Cummins. Amit Mishra will take care of the spin duties for DD while Shahbaz Nadeem may get a look-in as well. 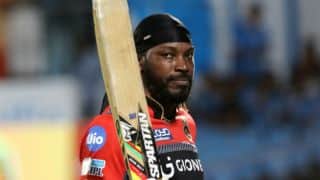