Sunrisers Hyderabad have won two group games against Gujarat Lions in IPL 2016 that gives them a slight edge against the opponent.

All hopes to staying alive in this league has indeed shattered for Kolkata Knight Riders (KKR) after Sunrisers Hyderabad (SRH) regain momentum and have continued to stay until the finish line in IPL 2016. This means that SRH will now face Gujarat Lions (GL) in Qualifier 2, which is almost semi-final 2. This is a deciding match and a do or die situation for both teams. Chasing down the target of 163, KKR managed to complete their quota at 140 for 8 at the end of their innings. Manish Pandey was the top scorer for KKR with his knock of 36, skipper Gautam Gambhir 28 scoring the second highest runs. SRH batting first posted 162 for 8 in 20 overs with Yuvraj Singh scoring quick-fire 44 from 30 balls. FULL CRICKET SCORECARD: Gujarat Lions vs Sunrisers Hyderabad, IPL 2016, Qualifier 2 at Delhi

KKR  got off to a great start in IPL 2016 attaining 4 win from their initial 5 matches which included the likes of SRH and Mumbai Indians (MI).  KKR bowled Delhi Daredevils in their first match for just 98 runs giving them the much needed boost. KKR in the second half of the tournament played well in patches winning just 4 from the remaining 9 games.  KKR qualified at No.4 in the table with 16 points to their name. KKR played a do-or-die match against SRH winning it by a comfortable margin of 22 runs.

The ball ultimately lying on SRH’s court, has lead them to yet another win keeping their hopes intact to stick through until the end. On the hindsight, GL cannot be taken  lightly after their victory was snatched away by Royal Challengers Bangalore (RCB) defeating GL by 4 wickets. Despite an all round effort by the entire team, GL were unable to break the crucial partnership between AB de Villiers and his team mate Iqbal Abdulla. Considering SRH have won twice against GL in both the ties between these teams, they move ahead in this qualifier with an advantage. Depends on how GL avenge their earlier defeats in this crucial game. The qualifier 2 is to be held at Feroz Shah Kotla, Delhi on Friday. Considering both teams are level headed, it is definitely going to be close call. 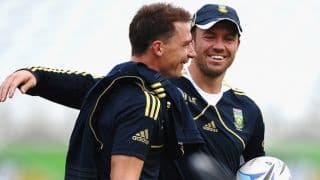