Dhawan has been traded to Delhi Daredevils (DD) in exchange for Vijay Shankar, Shahbhaz Nadeem and Abhishek Sharma.

Indian Premier League (IPL) Sunrisers Hyderabad (SRH) on Monday officially announced that India opener and one of their batting mainstays, Shikhar Dhawan has been traded to Delhi Daredevils (DD) in exchange for Vijay Shankar, Shahbhaz Nadeem and Abhishek Sharma.

Dhawan, who played for DD in the first season when he notched 340 runs in 14 matches is reportedly unhappy with SRH after his price last season went below expectations during the IPL Players Auction.

It is with a heavy heart to announce that one of our long-standing players Shikhar Dhawan will be moving to another franchise in 2019. The Sunrisers were delighted to pick up Shikhar in the auction after using one of its RTM (right to match) cards earlier in the year. Unfortunately, it has become apparent that the player has been unsettled ever since with the amount he was bought for in the auction, which unfortunately we cannot rectify due to IPL rules, Sunrisers Hyderabad said in a statement on Monday.

The franchise has made the decision to trade Shikhar as they feel it is best for both parties. The Sunrisers values the great contribution that Shikhar has made over the years and saddened that due to financial reasons he feels it s time to move on. We wish him and his family all the best.

After playing for Delhi Daredevils in the first season, Dhawan made a brief pit stop at the Mumbai Indians camp for two seasons, where his stay proved costly. He scored just 241 runs from the 15 matches in two seasons.

However, ever since joining Hyderabad, earlier Deccan Chargers in 2012, before the team rechristened itself to Sunrisers in 2013, Dhawan has formed a formidable force with Australia s tainted former vice-captain David Warner. With 2768 runs in 91 innings, he is the franchise s top run-getter. 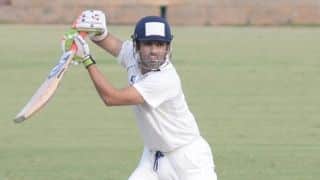