Defending champions Sunrisers Hyderabad (SRH) welcome league leaders Kolkata Knight Riders (KKR) to the Rajiv Gandhi International Stadium, Hyderabad for match 37 of the Indian Premier League (IPL) 2017. KKR are more or less assured of a place in the playoffs, but another two to three wins will surely ensure that they finish in the top two. SRH on the other hand will look to continue their climb in the table and make sure that they do not leave it too late. Last time these two sides met was on April 15. KKR eased to a comfortable 17-run win at the Eden Gardens, Kolkata. FULL CRICKET SCORECARD: Sunrisers Hyderabad (SRH) vs Kolkata Knight Riders (KKR), Match 37 at Hyderabad

After losing a couple of matches in a row first to Delhi Daredevils (DD) then to Gujarat Lions (GL) KKR have bounced back extremely well, winning the next three matches against Royal Challengers Bangalore (by 82 runs), Rising Pune Supergiant (by 7 wickets) and DD in the reverse fixture (by 7 wickets). They will look to keep the momentum going. There are a few things that has worked in their favour. Sunil Narine s promotion to the opening slot has done them wonders. His sole job is to make full use of the Powerplays by getting as many boundaries as possible.

Also, the form of Gautam Gambhir and Robin Uthappa has been terrific. In the last couple of matches KKR have won, the bowling side have failed to break this partnership cheaply and as a result have suffered. They have put on over 100 for the second wicket in the previous two games, which has taken the match away from the opposition. With Sheldon Jackson given a chance ahead of leg-spinner Piyush Chawla in KKR s previous match against DD, their batting looks all the more solid. IPL 2017: SRH are a tough side to beat, says Gautam Gambhir

SRH welcomed back Ashish Nehra and Yuvraj Singh back into their XI in their previous match against Kings XI Punjab (KXIP), which they won comfortably by 26 runs. Just like KKR, SRH s top-order is a major threat as well. Openers David Warner and Shikhar Dhawan have been in tremendous form. Kane Williamson too has made the No. 3 position his own with some scintillating performances in the recent past. If that is not enough, they have hard-hitting batsmen like Yuvraj, Deepak Hooda and Moises Henriques to follow. IPL 2017: Gautam Gambhir says, “I don t think there is something called finisher”

SRH were tipped to have been the most balanced side in IPL 2016, they are slowly, but surely getting there this season as well. Bhuvneshwar Kumar has been excellent with the ball once again, having picked up 18 wickets in 8 matches so far. Young Afghan leg-spinner Rashid Khan too has impressed everyone with his bowling. He has 11 wickets from 8 matches.

SRH might want to add to their spin department. With Henriques dropping lower down the order with Williamson and Yuvraj in the line-up, SRH might want to bring Mohammad Nabi back for this game. Nabi has played just one game in the tournament, in which he did a good job with the ball. He can be a handy batsman as well, especially in the latter stages of the innings. That will perhaps be the only change SRH might consider going into this match. IPL 2017: Gayle ducking Umesh was highlight of KKR vs RCB match, says Gautam Gambhir

Head-to-head: SRH and KKR have played each other 10 times, with KKR winning seven of them. KKR also have a superior record in this venue. Out of the three matches between these two sides, KKR have won twice, with SRH winning once. Gautam Gambhir with 281 runs is the leading run-scorer between these two sides. Dhawan has hit 249 highest for SRH against KKR.

Prediction: The game will perhaps come down to the strong top-order of both sides. Bhuvneshwar and Coulter-Nile will be the key bowlers for SRH and KKR respectively. They will be entrusted to cause some early damage. If that happens, their respective team will be chasing a moderate score. 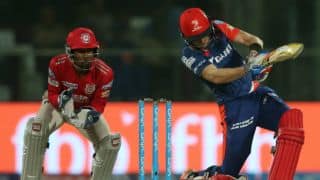