Follow the live cricket score of the IPL 2015 game between SRH and RCB.

The Sunrisers Hyderabad (SRH) are facing the Royal Challengers Bangalore (RCB) in their Indian Premier League (IPL) 2015 encounter at the Rajiv Gandhi International Stadium, Hyderabad. This is a very crucial game of the IPL 2015 as the two teams are still in the race for the playoffs. This encounter is to have implications on the table and some of the other teams. Live Scorecard: Sunrisers Hyderabad vs Royal Challengers Bangalore, IPL 2015

SRH have done well to keep themselves alive with a few consistent performances in the last few games. On the other hand, RCB also picked up pace and have gone on to keep their hopes alive. This game should be one competitive one as there are two sides looking to get through. They also have very exciting players on offer and it is a good sighting for the crowd. 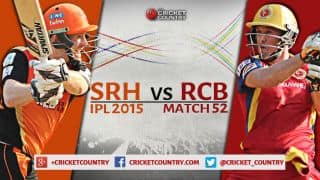 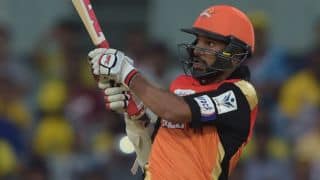