At the time of writing this report Gambhir had scored 50 runs from 41 balls.

Gautam Gambhir has reached 5,000 Twenty20 runs in Match 8 of Indian Premier League (IPL) 2016 between Kolkata Knight Riders and Sunrisers Hyderabad. Suresh Raina, Virat Kohli and Rohit Sharma are other Indian batsmen who have more T20 runs then Gautam Gambhir. Chris Gayle, Brad Hodge, Brendon McCullum, David Warner and Shoaib Malik top the list among highest run-scorers in T20 cricket. Gayle has 8,840 runs from 145 matches. He is way ahead of Hodge, who has scored 6,998 runs from 256 games. Gambhir is 16th in the list. Gayle has the best average as well as the strike rate among all the batsmen in this list. He averages 42.91 whereas his strike rate is 150.03. It is big achievement for Gambhir considering he has only featured in 198 matches excluding this.LIVE CRICKET SCORECARD: Sunrisers Hyderabad vs Kolkata Knight Riders, IPL 2016, Match 8 at Hyderaba

Gambhir has a highest score of 93 from these matches while he averages 28.31 and his strike rate is 120.44. He has hit 17 fifties so far but that hundred still eludes him.  Gambhir has smashed 577 fours and 71 sixes in his career. Gambhir’s T20 record includes playing for five teams viz. Delhi, Delhi Daredevils, India and Kolkata Knight Riders. After Gambhir; JP Duminy and Shane Watson are next in the list while the next Indian is none other than his opening partner for this match Robin Uthappa, who has scored 4,708 runs from 92 matches.

Talking of the match, at the time of writing this report Gambhir had scored 50 runs from 41 balls with the help of seven boundaries. Uthappa, at the other end was batting on 38 and KKR were very close to winning the match. 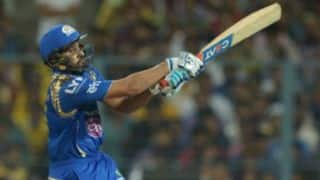 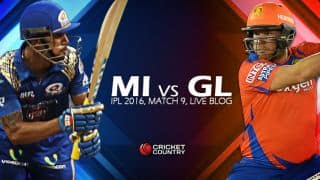