Apex Court to hear Sunil Gavaskar's appeal after a change of judges at the bench.

The Supreme Court did not take up the issues for hearing raised by veteran cricketer Sunil Gavaskar, who was appointed as an interim president of BCCI for managing the seventh edition of the Indian Premier League (IPL), as one of the recently-appointed judges had appeared for a party as a lawyer.

When the matter came up for hearing, a bench comprising Chief Justice R M Lodha and Justices P C Ghose and Rohinton Nariman referred the issue raised by Gavaskar in his June 9 letter before the bench which was dealing with the main matter. Justice Nariman, before his elevation as the judge, had appeared as senior advocate for N Srinivasan, against whom the apex court has ordered an inquiry in the wake of the IPL betting and spot-fixing scandal in the sixth edition.

The matter will now be heard by a bench in which justice F M I Kalifulla will be one of the judges. Justice A K Patnaik, who headed the bench, has recently retired. Meanwhile, it is learnt from those associated with the matter that Gavaskar has sought a direction from the apex court about his future role after the IPL, which he was appointed for, ended this season.The apex court had on May 16 ordered a probe by the Justice Mukul Mudgal committee against Srinivasan and 12 prominent players in IPL betting and spot-fixing scandal. The court, which had asked the panel to file a report in a sealed envelope before it by the end of August, had also asked Srinivasan not to act as BCCI President during the probe.

It had earlier on March 28 appointed veteran cricketer Sunil Gavaskar as an interim president of BCCI for managing the IPL 7. Shiv Lal Yadav was appointed as an interim BCCI president by the court to look after the other cricketing activities of BCCI. 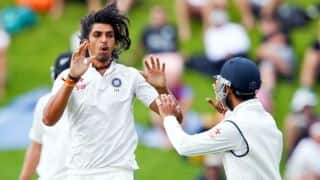