BCCI vs Lodha: SC postpones hearing to October 17; bars funds from being released

BCCI vs Lodha: SC postpones hearing to October 17; bars funds from being released

The Supreme Court on Friday postponed the hearing between Board of Control for Cricket in India (BCCI) and Lodha Committee to October 17.

The much-awaited verdict has been delayed to October 17. The Supreme Court on Friday postponed the hearing between Board of Control for Cricket in India (BCCI) and Lodha Committee, as the apex court will breathe a sigh for the next 10 days. In addition, the court barred the board from releasing funds to state associations. The order was supposed to be pronounced its order of Justice Lodha Committee’s please by Friday evening, attempting to bring forth transparency in the board. All the same, we will have to be wait until October 17, thus giving more time for BCCI top execute the regulations and rules requested by the Lodha committee. Live cricket scorecard: India vs New Zealand, 3rd Test

The hearing on October 6 put BCCI in the headlines, as the board said they would stay out of international cricket from the third Test between India and New Zealand at Indore, commencing October 8. “In light of recent comments made against IPL, all members need to collectively decide, whether to stop this extravaganza,” BCCI Secretary Anurag Thakur said in letter written to all the state association. He further added, “In the last nine years, state associations have got Rs 2,406 crore from the IPL profits, the further investment in the game. BCCI has paid Rs 110 crore from the IPL profits to ex cricketers as onetime benefit, those who were not covered under platinum jubilee scheme of the board. Also read – VVS Laxman: India s ascent to the pinnacle an all-round team effort

There is every possibility that Ranji Trophy may be stopped from the third day itself. If the board is not there, how can the matches be organised in such scenario. And it s not only Ranji Trophy which is blue riband tournament. It also consists of Senior and Junior Women s championship, our U-23, U-19 and U-16 championships. You need funds to carry out these BCCI matches smoothly, a well-informed source told PTI today. 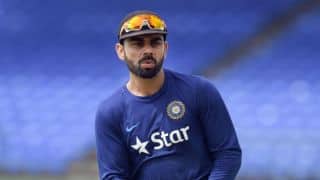