The entire courtroom was stunned when senior advocate Vikas Singh, appearing for Kerala Cricket Association, during the flow of his arguments used an unparliametary word.

New Delhi: The high stake BCCI hearing on Friday witnessed a piquant situation when a senior advocate used an unparliamentary word while assailing the verdict, evoking sharp reaction from the Supreme Court which not only reprimanded him but barred him from advancing arguments for the day. The charged-up hearing in the BCCI matter before a newly constituted bench of Justices Dipak Misra, A M Khanwilkar and D Y Chandrachud, saw an unprecedented heated exchange of words between senior lawyers representing various parties. The entire courtroom was stunned when senior advocate Vikas Singh, appearing for Kerala Cricket Association, during the flow of his arguments used an unparliametary word while alleging conflict of interest on behalf of Justice Lodha Panel which was paid Rs. 3 crore by Board of Control for Cricket in India (BCCI) for its services.

Singh immediately profusely apologised to the bench and said he did not mean or intend to say that word. However, Justice Misra, who headed the bench, immediately took strong exception to the word and said “This is not done. There was no need of this. This word is absolutely unnecessary. Mr Singh you please sit down. We will not hear you”. The senior advocate continued to apologise, saying “Sorry My Lord, I had not intended to speak this word”.

To this, the bench said, “we will not hear you, at least for today. May be some other day”. Justice Misra then asked Attorney General Mukul Rohatgi whether he agreed that the use of the word was absolutely unnecessary. The top law officer said “Yes. It was not necessary and this language should not be used in court”. Every word has its limitation. Sorry was meant for making a person to think and speak, and not to speak and then think,” Justice Misra said.

Justice Chandrachud, who had earlier penned a couple of orders in BCCI matter, said “This kind of language is not even used in district courts of Uttar Pradesh”. Before being elevated to the Supreme Court, Justice Chandrachud was the Chief Justice of Allahabad High Court. Heated exchanges were also witnessed in the jam packed courtroom between senior advocate Kapil Sibal and amicus curiae Gopal Subramaniam. Sibal, who represents BCCI and some state cricket associations including Himachal Pradesh and Maharashtra, raised the issue of debarring office bearers on account of their cumulative tenure in state bodies and BCCI.

“Amicus curiae [Gopal Subramaniam] mentioned before the court and the January 3 order was modified a day after. He did not serve any notice upon us and came before the court and got the order modified. I take serious objection to this. There was no such recommendation which was accepted by the court,” Sibal said. To this, Subramaniam said, “I just brought the matter to the court’s notice as an amicus and it was corrected. You [Sibal] are casting aspersions on me”.

“It was nine plus nine and not just nine. You should not act like an interested party. You are an amicus and atleast given notice before mentioning the matter and getting the order modified,” Sibal said. When Sibal further sought modification of January 3 order, the amicus objected that the cricket body had itself gave an undertaking that they will implement the Lodha committee recommendations. 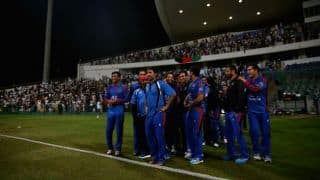