The beleaguered Dhoni had offered to quit ODI captaincy in the wake of the shock series defeat against Bangladesh.

Dhaka: Two senior cricketers, Suresh Raina and Ravichandran Ashwin today expressed their wholehearted support to under-fire captain MS Dhoni, calling him a “legend” who could not be solely blamed for the team’s debacle in Bangladesh. While Raina posted a picture of Dhoni along with his team-mates with just a simple message “respect” and a sign of folded hands alongside, Ashwin backed him to the hilt when he attended the pre-match press conference.

The beleaguered Dhoni had offered to quit ODI captaincy in the wake of the shock series defeat against minnows Bangladesh if it guaranteed success for the Indian team. “If you don’t go behind your leader now) then when will you? So as far as I am concerned it’s like an army, if you don’t go behind your leader then you are definitely going to get shot. If my captain asks me to die on the field, I’ll do it,” Ashwin said.

“It’s not just now, any captain you have to go behind him. If he asks you to die on the field, then you have to be prepared to do it.” Calling Dhoni one of the legends of Indian cricket, Ashwin said: “He is one of star cricketers. He has done so much for the nation. We can’t really forget what he has done.

“Yes, I know bad results crop and all kinds of statistics crop up. With statistics you can prove whatever you want as you please. You have to give credit to the individual because he has done a lot of good things. You can’t blame him for the whole team’s performance. That’s not fair. I would say we have failed as a unit, failed as a group. We need to grow up as a group. To finish a season on a loss is not always bad. You can go back and work on whatever you need to work on,” he insisted.

Several former cricketers yesterday voiced support for Dhoni to continue as ODI skipper, saying he still has a lot to contribute to Indian cricket. Former captains like Bishan Singh Bedi, Dilip Vengsarkar and Ajit Wadekar and players like Chetan Chauhan, Chandu Borde, Syed Kirmani and Kiran More strongly backed Dhoni, saying that there was no need to press the panic button and he is the best bet till the 2016 World T20. 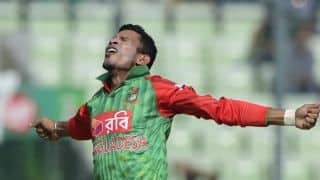 Nasir Hossain confident of 3-0 series for Bangladesh against India