Suresh Raina took to Twitter to announce the birth of his daughter.

Suresh Raina has finally confirmed about the birth of his daughter. The left-handed Indian batsman who is currently playing in IPL 2016 took to Twitter to state that he has been finally blessed with a baby girl. Raina added that the long wait is finally over, but it was totally worth it. He said in his tweet that he is now a proud father. He, in fact hash tagged the words #ProudFather. Raina said that his daughter is being readied for her first photoshoot. It’s nice that Raina has finally officially announced that he has now become a father. A few reports came yesterday which had said that Raina and his wife Priyanka were now parents, but those proved to be rumors. The 29-year-old cricketer had cleared the air yesterday itself. Raina had sent out a tweet to his followers on Twitter saying – “ Still waiting…#BabyOnTheWay #HardToWait”. ALSO READ— Suresh Raina: Still waiting, baby on way; Earlier rumors false

However, today Raina tweeted through his account and confirmed that he is now a father. He also posted images of his daughter. The Uttar Pradesh cricketer married Priyanka Chaudhary in Delhi on April 3, 2015. Earlier, Raina had said “I have already redone the homes at Holland and Delhi. Right from baby clothes to cots, prams, posters and wallpapers, I have done up both the homes in such a way that Priyanka and the baby will be completely at ease. After the delivery, both of them will travel to India and my whole effort is to ensure their comfort.”

Welcome my beautiful daughter. #GraciaRaina. Long wait but totally worth it. #ProudFather.She is getting dressed up for her photoshoot

IPL 2016, Match 47, Pick of the tweets: Mumbai Indians vs Delhi Daredevils at Visakhapatnam 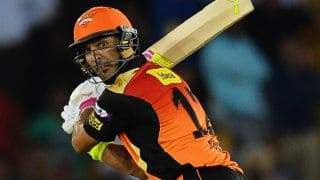