Raina has looked in sublime touch in this aggressive display of batting.

Suresh Raina scored his fourth One-Day International (ODI) ton as he smashed the England bowlers in the second ODI at Cardiff on Wednesday. Raina walked out to bat with India on 110 for three and still precariously placed. But Raina’s fluent innings has completely changed the complexion of the Indian innings.

Raina looked to be at consummate ease at the crease while MS Dhoni continued to be sedate and struggled to get things under way. India had lost their way in the middle after losing well set batsmen Rohit Sharma and Ajinkya Rahane. Raina has played a little gem after seeing off the short deliveries, caressing the bad deliveries of the struggling Chris Jordan and then got to 49 with a majestic straight six down the ground then got to his fifty. Woakes erred in line yet again and Raina smashed another six, this time over long leg and India was getting a move on.

The glide down to thirdman, the straight sixes and the typical hoick over midwicket and covers were all seen in Raina’s innings. 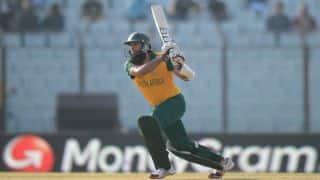 BCCI-RCA row: Future of Rajasthan cricketers in trouble ahead of domestic season